When you have indie players, you get indie blocks. Even if there are free accounts. It’s allowed. I made sure. 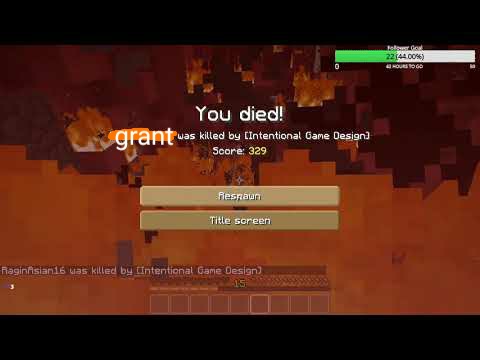 The use of memes doesn’t make your point any more true, also, you can’t make sure, because you’re not an admin, you have no control over Flowlab. The world does not revolve around you, please get back down to Earth

Anyway, I’m heading off because I want this topic to stay around, I recommend you do the same, so we can continue to discuss online play here. This is immature

And please, do not refer to me by my real name, we’re not friends, we’re developers who use the same platform

Lol, then don’t share it. You can’t prove your point either, you’re not a mod, so your point is invalid. And memes do make it better. Lighten up.

Oh, yeah I totally did lol, then yeah, I take back what I said about it being grammatically correct, it certainly wasn’t lmao

Glad you caught that.

Well, you did, but thanks

One way or the other

However, I actually took action. I asked Grazer if it was intentional, and I have an answer - because I didn’t immediately assume I was right:

I was wrong - and I admit it. But, you’re not right either. He wants collaboration to be a thing on this platform, but an exploit like this can cause problems, so as of now, there is no action being taken, and that could remain to be the case, or it couldn’t, who knows as of now.

So get off of your high-horse, Slime - you were wrong, too

@meburningslime
@browngr
Hey, folks. Before this blows up any further, I need to interject.
This is off-topic. It’s hurting the thread, and the message its creator is trying to convey.
I will hear no 'but’s or 'he started it’s. This ends here. I don’t care where it goes, just have your argument elsewhere. If you would like to butt heads some more, make another topic.

The conversation is already over, there’s no point in telling us to stop if it’s already stopped. I recognise that it’s off-topic, and that’s why I wanted to cut things off earlier, as I had stated in my initial messages.

Granted, but considering you were instigating a response, I am not inclined to believe you.

So get off of your high-horse, Slime - you were wrong, too

Also, read my last message. Do not post about it any more on this thread. Like I said, if you want to fight, do it elsewhere. If you want to elaborate on why you said what you did in previous messages, do it in another thread of your making.

I think he already knows that, he just wanted to make a final remark to make sure this argument is dead, you don’t have to keep bringing it up or how you should get credit for trying to end it.

If you really want to end it then just stop replying a final remark to it.

Also I’m no better for saying this so I apologize.

Not that one, this one:

Anyway, I’m heading off because I want this topic to stay around, I recommend you do the same, so we can continue to discuss online play here. This is immature

Admittedly, I didn’t actually leave, but that’s because he continued the conversation and instigated a response from me. I know it’s immature to put the blame on someone else with the “he did this” and “he did that” but it is the truth in this one instance. I’ve turned off notifs for this post, because now I’m done.

And Pumpkin - you’re clearly biased in this conversation, based on Slime’s actions being exact copies of what you just said I’ve been doing as well

I just don’t get why y’all started the argument in the first place. Whether you agree with it or not, it’s not really something that requires both of you so…

I’ve said it once many a times before, I’ll say it now…

I kind of want to put my insight into this concept that @Lordkhalton introduced, but I’m also trying not to join in on this dispute. I don’t understand what is going on up there anyways, but I don’t want to bother reading what was happening so that I don’t get involved. Too many of these arguments have already happened.

Anyways, with the Data Types Update and all, I’ve also noticed that I could potentially give players the ability to gain “Admin” or “Moderator” powers. I plan on incorporating this system onto my upcoming Monster Maze game. I’ve also realized that this even gave us the ability to ban players from playing my game. At first, I was concerned if this is a power that I should use, and apparently, around 9 people agreed that I should use it… of course, only if it was necessary.
Besides, admins and moderators don’t really have that much power in Monster Maze anyways. All they will be able to do is expose everyone’s player ID, so that if a player decides to be a jerk, they can jot down the ID and then let me know what happened so that I can look into it and punish the player. I am considering other options, such as access to Staff Channels in the soon-to-be-developed Monster Maze Discord Server, and exclusive cosmetics.

Now, I absolutely REFUSE to give any players any powers that would let them gain an advantage over other players competitively. I want a fair game for all players, regardless of who is in charge. So if you have admin or mod, don’t expect it to be a “You Automatically Win Every Game” card.

I got over 50 notifications just by you guys fighting

Yeah, sorry for the inconvenience. Hopefully this is the last time it happens.