So, you know murten101’s 3D FPS rendering system? So, to make it more precise, couldn’t you just make 4 objects that have 8x8 pixels in size with polygon hitboxes to replace the walls and 3D walls? @TinkerSmith @“JR_01” https://flowlab.io/game/play/1398956

I don’t understand what you mean @MrMcMemerMan,
what do you mean by " make 4 objects that have 8x8 pixels to replace the walls"?

Murten’s example uses raycast for every section of the screen. You would make it more “precise” by increasing the number of sections with the increased number of raycasts.

Just a random train of thought. I’m not going to try it because I have the free membership and you’re essentially just multiplying the amount of objects by 4 lol

I instead recommend making all the walls the same object then,
the best way to control them individually is to spawn them with a starting value that can be extracted.
Then you just have to turn on the switch that has that mailbox that is also the starting value.

I actually made a few test back when since the original topic. There’s a few things I want to do, but unfortunately there are a few things have happened and stuff has been keeping us busy. Maybe we will have more time in the summer…

But here’s a Gif for what I’ve tried to do since then, this is 2 methods:

Are those walls spawning or just changing transparency?

Transparency and color, they’re only spawned once.

Doubling the ray count really helped in terms of playability

Same as murten101's rendering system, but with more objects for a more detailed and readable render. The Red and Blue blocks are just markers for me to see where the middle blocks are (W and D to move, Left and Right arrow to turn.)

The walls are still really blocky, I noticed this in Murten’s example too.
I would relook at the code if you want to get close to what I did in the Gif.

I think I’m going to share one of my older test that uses the same display method.
I plan to make a completely different display method later hopefully: 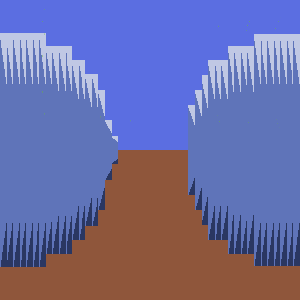 WASD to move, move to turn off auto movement. Press F to show the Casts

Cool, but I’m not a math major lol

Neither am I, you’ll never see me do calculus.