Have you ever wanted to assault a bat with an apple? No? Me neither.
I originally just wanted to make a homing attack example and then this happened.
This is why I never get anything done.
http://flowlab.io/game/play/781446 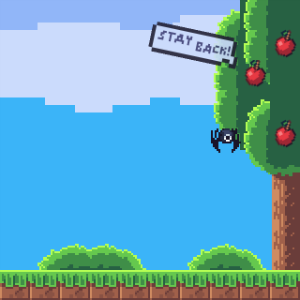 You are a happy little apple, but a bat keeps flying near your tree. Every day it comes back and annoys you.
DESTROY IT.

Left and Right to tumble, Spacebar to homing attack.
This was made out of boredom.

This one is pretty bizarre, but I like it

I can’t destroy the bat though - how many hits does it take?

The only thing I have to say is:

@grazer You can’t kill it. It’s just something to take out your anger on I guess.
I honestly never planned on building any of this, so you can’t beat it or anything lol

I mean, I could make this into an entire game with story and cutscenes, but I’d really rather not. It would be funny, and maybe make a good phone app, but man would it be a dumb just for fun game, because nobody would ever take me seriously in future games.

Oh, also @grazer, I noticed that flip/back doesn’t work. The bat would flip upsidedown, and when I tried vertical flip, the bat rotated. I had to use toggle for it to flip horizontally. Might be a bug.