Why do I not know how to use logic gates…

I’ve read the manual but I don’t know HOW to use them for stuff.

I sound like a noob but trust me, I’m probably just being a bit mental and over thinking it.

I would really like to know how to use it for a proximity miss and hit, MelloJello said I could do that with NOR gates 17 days ago but I have no clue how to-

A prodigy who has noobed her way into flowlab logic gates

I shall be back online in around 12 hours folks.

Also, won’t be online much tomorrow due to my final exam in school.

I mixed up dates, I don’t have the final exam until next Tuesday, so I will be online tomorrow plenty.

I can help you with logic gates… I think… okay, I will TRY to help.

I could probably teach myself the rest if you give me a way I CAN use them.

I learn things best by seeing it in action and what it can do rather than reading how to use it.

MelloJello’s wrong about that proximity thing, btw. If it isn’t triggering, it can’t activate the logic gate. Check out the code for my oven and my shop in this game: 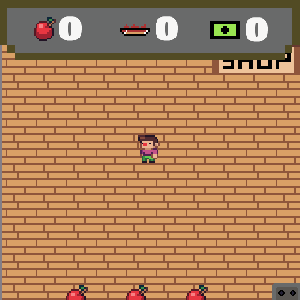 ## Controls: - Arrow keys to move - Press E to interact with stuff - Collide with apples to pick them up *** ***Look in the code for bundles. I'm too lazy to make an explanation for this one, since it's too complicated.***

Well, once you come back on @DinoDev , this is the best I can explain them (I just recently started using them, too, about three months back):

Think of it like this,
You want to have it so that the player moves, but only while touching the ground. We would use the “AND” Logic Gate. What this does, is that we connect the key press (lets say left arrow) and the ground collision (or more accurately, the ground raycast) to the AND Logic Gate inputs. What this does is that it’s saying that “When pressing left arrow AND on ground, output”.

Different logic gates work with different variations of inputs. You may have seen the “on + on = off” or “off+off = on”, well, it’s simple. Off = no input is going through. So, if an input is no longer there, such as an “on ground” raycast while you are in the air, then if will trigger “off”. I know this sounds very complicated, but let my try explaining again, but with electrical currents:

You flick on a light switch. However, the fuses are mixed up, so it’s doing the opposite. So when no electricity is going through the wires, then the lights come on. You might think “when would I ever use that?” But you might, and I have, so it’s good to know.

Once you get the idea of the on/off does and their combos, you’ll get a hang of it. If @JR01 is active, he might be able to help.

When I get confused to when to use what Gate, I look at the manual page,
Flowlab User Guide

You can also test around by using Always blocks

I’ve read the manual but I don’t know HOW to use them for stuff.

I would try maybe looking up a video tutorial, if they exists, for them, if not then try looking into different code to see how they are made.

Actually nevermind. Just did a test, and it turns out that the N gates DO activate when not receiving input…

Thanks so much for everyone’s replies! I’m going to bookmark this post for myself. I’ll keep it as a reminder for a while until I know what I’m doing with all of them.

Thanks again for all the help!