So I have started a game, and it is turning out VERY nicely. I have made one enemy so far for the first area you can be in. The thing is, I have it set to where when you are near it, you can attack it with S. This worked fine, but when I place the enemy on certain parts of the level, it wont let me attack it. I would think this is a bug because it works fine on other parts of the level, but if im just being dumb, tell me please!

Edit: By the way, the glitched enemy is on the first left you can take.

Sounds odd, Ill look into it when/if I get the chance. 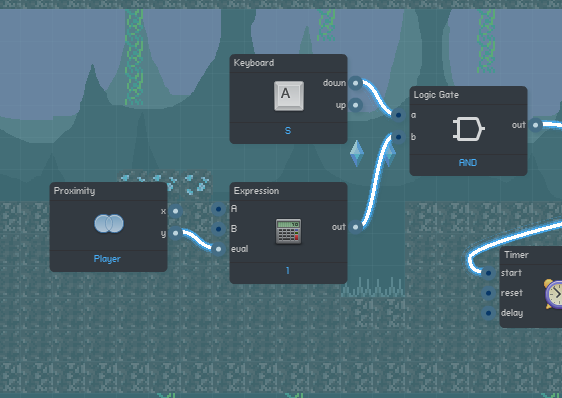 You can also use a Number component and just set its value to 1. It doesn’t matter whether you hook it up to x or y, both outputs are activated when the detected object is within range in any direction. That enemy had a negative x output though and wasn’t satisfying the AND logic gate, all the other enemies had positive outputs

@Wizardry thanks for the help, works fine now!