Dangerous floor (Could use some help)

Because you need to tell the message where to send it to,
the type should be gold floor 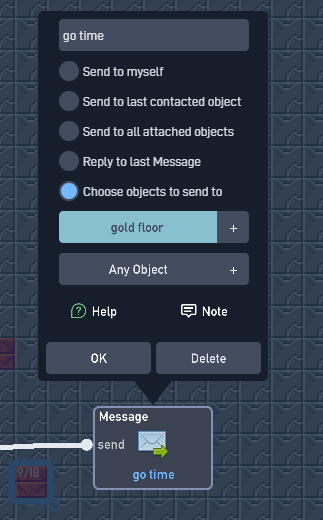 I tried that earlier but I’ll try it again

Sending a message to the gold floor type will send it to EVERYTHING that is a gold floor. Instead, use a collision in the gold floor to collide with the player. Then connect the collision with a switch (default set to ON), and have the OUT going to the switches own OFF and a timer (because we want to give the player time to react before spikes pop up), then have the animation connected to the timer. Next, connect another switch to that collision. Set it to OFF on the default. On the OUT, drag in a block that restarts the level. Go back to the other section of code, and connect the OUT of the timer to the ON of this other switch.
This is what your code should look like: 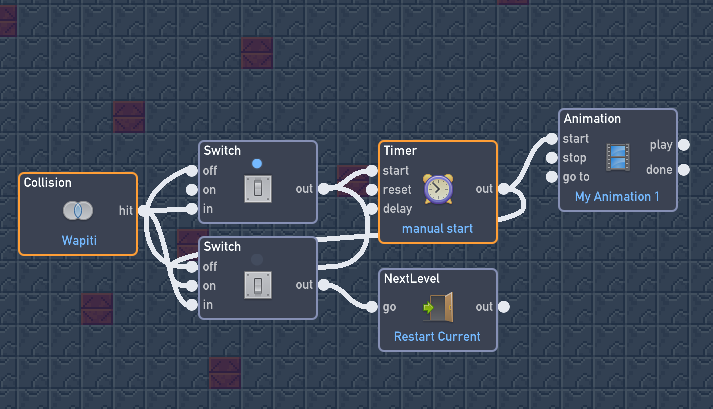 Also, refrain from using UI alerts when colliding with death objects. This makes the game not flow well, and it’s better to just have the character die instantly

Ok, this is a better version that uses raycasts instead of collisions (make sure to set the raycast angle to 270):

Or you could use this one with proximity:

In this one, just mess around with the proximity settings until you feel it works best.

You should preferrably set the timer to something like 0.1

I think you have to make the object movable in physics

I think they don’t. Making it movable would make it so the player could physically move the object, bouncing it around the screen. Not natural. It would also be affected by gravity, meaning it would just fall out of the level. Also not natural.