I’ve been working on a game that I started up for Flowjam, but never quite finished it. Also, the game was presentable but I didn’t enter it because I knew I didn’t have a chance against the other participants.

Day to Night is a 2-D crafting survival game where you mine resources and craft tools to either help mine faster or to defend yourself against the evils that awaits at night. This forum page is mainly going to be an update log for new items I should add in the game. I would encourage you play the game and come up with any bugs and probably characters I could add.

I was inspired by meburningslime’s game Terraria v3.6 and I wanted to make my own, but more simpler with less blocks to decrease lag. (I hope you don’t take offense by your game’s mention)

The rules are a bit complicated.
W, A, S, D, is for movement and jump
E, is for crafting menu
Q, is to toggle build mode
Arrow keys are to move the building outline
Secondary click to build (only if you have dirt in your inventory)
Aim, Click, and hold to mine resources.
If you can’t mine a certain item, then you must press 1-3 to cycle between sword, axe, and pick.
Sword can only be used to attack enemies.
Axe can only be used to mine trees
And Pick can mine stone

You can craft new tools like stone tools to mine faster and to mine iron. A wooden pick won’t cut it. Also the fighting mechanic is a but broken, so don’t head on fight a group of enemies just yet. There is an entire inventory system, so you can keep track of what you have. I guess I’ll stop typing to decrease you time and just play the game and let me know what you think. 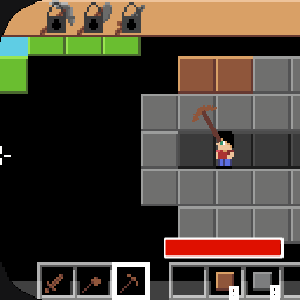 You should keep on working on the game; It was really good. All I have to say is the art needs a bit of updating. The Game is still epic though! @ManiacPumpkin @GrimProductionZ

The crackles while playing are in my opinion a little too loud, but other than that, I think it is a very good game!

I know this is a very old forum, but I figured that since I’m updating the game, that I might as well use this old forum as a sort of update log instead of just making a new one.

Well, I updated some of the pixel art to it. I’m currently working on a random world generator and it is working out really well, although I’m having some difficulty on what I should do for random structure generators. I think that for caves, it will spawn a block randomly throughout the world, and then that block will delete any dirt, stone, grass, etc blocks around it and it will have a chance to spawn another block. But I’ll make that chance low so I don’t end up deleting the entire world on spawn.
Just a concept idea, but I plan on making stone structures or alters already generated, but they will spawn randomly on the map, not sure how to do something like that, but I think I have an idea. If you want replay the game, the original map hasn’t been updated except for the graphics, I also plan on updating the menu and a lot of other stuff so this isn’t the finished project.

I’m currently working on The Facility, but I need a break from that, again. So I figured that I would return to an older project, now that I have an indie account.

If anyone has any future ideas for this game then I’m all ears.

Also off topic but if you have a short sentence and the character thing says hello just slap the slight smile emoji sense it’s literally considered a sentence. Just some helpful advice in there future

Ok, I would appreciate it if you guys stayed to the theme, lol. Although since I brought back such an old discussion, I don’t have much room to talk, but I plan on using this as an update log or mainly just a reminder that I’m returning to an old project. I just don’t want a bunch of notifications that don’t necessarily involve me.

Also I pretty much finished the world generation, but am currently working on cave generations, which is starting to take a little time since its not working out as I planned.

Alright so I used a similar design as GGSTUDIOS’ RNG world generator test.
It’s pretty much the same concept, but I used a lot different code and I made it generate a more hilly terrain. Once it spawns a grass block it will then start spawning dirt, then there is a 1/3 chance to spawn stone, but if it doesn’t spawn stone then it will continue placing dirt until three dirt is placed then it starts placing stone with a 1/10 chance of spawning iron. Although this system proves to be pretty accurate, sometimes the grass block won’t spawn until it is very low in the map making random holes sometimes and I need to fix that. I’ll use the same concept as the three dirt blocks.
Now I need to add tree spawning, maybe some vegetation for some ambience, and of course I need a background. I wanted to do something similar to that of terraria, but I need the background to be in the game level instead of actually being a background since the sky is made of game sprites. So I planned on adding a bunch of large sprites simulating distant mountains or forests and then making it read the players movements allowing it move alongside the player, but a little slower so it can add parallax. Not sure if I will be able to do this, but It would make the game much more interesting. That’s about it for today.

Alrighty everyone. This is just an experimental test for my Day to Night Game and I wanted to see if the world generator works for everyone as it does for me. Although there is no loading screen so you will see a bunch of sprites and bars flying around while they generate trees and the terrain. Currently I don’t have cave generations yet, but thats in the making.

It’s a pretty buggy system so if you start lagging or something goes wrong then please let me know so I can try my best to fix it. The generation process isn’t very laggy for me, and my device is pretty poor so it should work for everyone. REMEMBER: this is just an experimental design, everything may vary later on, but I wanted to know what you all think about it. I currently replaced the original level (well still around, just swapped levels) with the generation one. Let me know what you think.