Detect a row of objects (Solved) 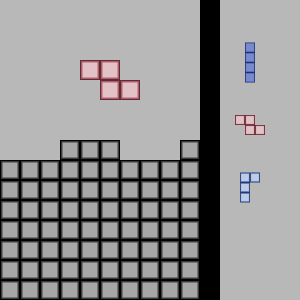 Have a row of invisible blocks fall down, if all of them hit the other blocks at the same time then you know the row is complete.

It would just be one row that would come down every time something is placed down, that row would then delete itself when it falls off screen.

also, there isn’t exactly a way to send output from every block to the world block without overlaps
also you cant use colliders but u can use proximities

actually, the row of blocks falling wouldn’t work because the pieces are large sprites, not individual blocks.

You could also shoot a projectile through the bottom row and have it count how many objects it hits. However, you would have to have each block shape made of individual square objects otherwise none of this will work anyway

he means to do this for every row.

different messages are a thing. But if it causes lag don’t do it

any other ideas that you may have?

idk I’m kinda busy at the moment, maybe @JR01 has an idea.

There’s several ways you could do this.
Like making long horizontal objects that detect collision or maybe count the hits with Raycasts?

If you want a better way to do this is to make a list of behavior look at each row and see if its filled.
The blocks will tell where they are in each list, like a table. Very similar to how old Tetris works.

Also, you’re using sprites in the shape of the things you want, not individual blocks so it’s kinda hard to delete an entire row because it’s not separated.

How would I make a table? i haven’t messed w/ lists

But if you have the distance and the position of the casting object you could calculate where the top of the row is in y = how high it is ?