Discussion for the MummyBot game

So i have character ideas for bosses:

The Fire God Ra, which can shoot fire blasts at MummyBot

The water god which i havent developed a name yet since i couldnt find an egpytian god name for a water god, can shoot water balls, making Mummy Bot malafunction

The earth god, who can throw rocks and manulpatie dirt,

And the finale boss is this evil king, who controls a big robot to kill MummyBot.

You could look up different mythology gods like for the water god you could use Poseidon or Neptune. Although I don’t know any gods off of the top of my head that deal with earth.
Actually Ra is the egyptian god of the sun so technically it would work. You could also use Apollo or Hephaestus.

I feel like it would make more sense to stick with Egyptian gods. I would suggest looking up Egyptian gods and seeing if any give you inspiration for a boss.

thank you! Ill make sure to do that!

The Egyptian gods of the sun, sea, and earth are:

Ok so ive been told i have to discuss the MummyBot game in one discussion and not clog up the forms so how do i delete a topic?

When you click on the “…” icon in the topic, you will see what appears to be a trash can. Click on that, and the topic will be withdrawn.

(Keep in mind that it will take 24 hours for the topic to be gone for good, so if you regret your withdrawal, you have a chance to cancel the deletion of the topic)

That’s strange. It could be because people already commented on the discussion. Most discussions that I have seen been deleted were ones that had no comments at all.

Use the one boi with dog/cat face or whatever 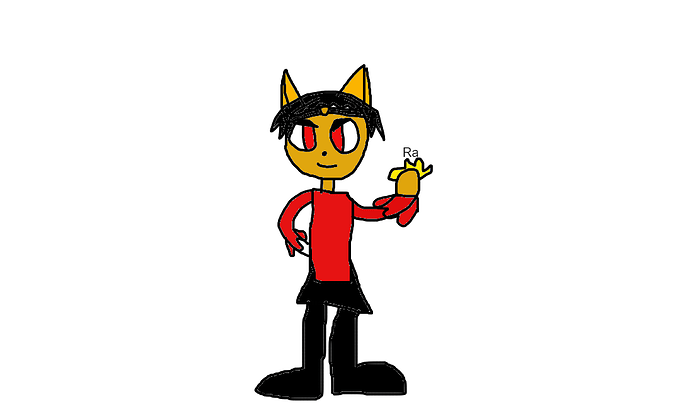 The yellow stuff is a fire on her hand

You remembered to add a neck this time. XD
Also, nice drawing!

How should the MummyBot game be played

I dont have indie, so maybe if i join an indie team, maybe we can make the game?

You could make a journey based off of Herodotus for the gods. I recommend using ares for the fire god, since Ra is the sun god. Very different since they didn’t know the sun had anything to do with fire…