Doors Of The Kings

That would be the case if I were to go for a futuristic-military theme but I’m mainly going for a medieval-run-of-the-mill-adventurer style, at least for the player character that is. The backpack’s probably gonna be more of a potato-sack kinda thing since you would need a lot more mobility for your arms. Although, looking at the backpack accessories made me realize I probably won’t need any external pouches attached to the backpack since it’s not like you can carry grenades or ammo packs around.

I’ll probably also start looking at other games with around the same style as DOTK for references though.

Bro Halo MCC season 8 is all about this 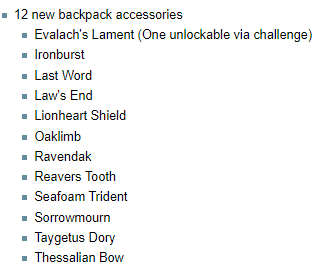 Well, yes, it is “medieval” but it’s a more realistic medieval from the middle ages that mix things from the Great Crusade and Ancient Grece (spartan) together, then throw in a bit of stuff from the Viking age.

I’m trying to take the player into more medieval fantasy, more of your typical dnd setting. Although there probably won’t be any kind of metals since you’ll just have poor man’s leather armor and a mercury sword.

Thanks for the reference though, it does give me a few ideas for a different group of enemies.

Understandable, have a great day and game development!

No problem! Glad I could help with something. 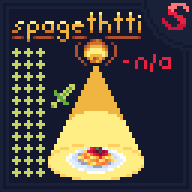 did somebody touch it?

So I’ve kinda just added a bit more onto the sheet. Just leather armor and a second design for the backpack.

The armor is going to be an overcoat that goes on top of something, I need to figure out what I could add on top of it so that there’s something that gives some warmth, but I could just explain that you don’t get cold with magic.

The second version of the backpack takes a bit of inspiration from real medieval backpacks mixed with a bit of fantasy. It has a single strap that goes on kinda like a gun strap so that you get more mobility with your sword arm. On the sides, there’s a death for the sword and a nail on the side to hang a shield on. The sword and shield’s unsheathed position is opposite to the arms that wield then, so that it’s easier to unhook the shield and sheath the sword. 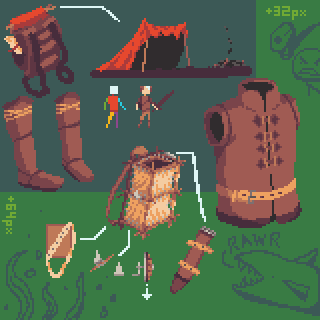 I’ll add around 64px outward and try to fill in as much space as possible. Instead of keeping everything separate, I think it’s fun trying to put as much stuff down to fill the space, so I’ll be doing that for this and any other designs in the future.

I absolutely love your process for the art

I like the backpacks lol they have a lot of character

So technically I am late, but if I were to run all the way to the shore, then come into possession of a McDonnell Douglas F-15 Eagle fighter jet, which can fly at a top speed of 1,650 mph, and make my way over to baker island, one of the United States Minor Outlying Islands that’s located in the pacific ocean that’s located 4400 miles away from me, it means that I can travel to baker island in less that 3 hours, just in time for the update to happen on time.

And by the time I researched and wrote this if I don’t happen to stumble on a fighter jet out my doorstep, I’d miss it by a few minutes, so I better get going.

The final design of the backpack, it’s a combination of the two previous ones, the sword and shield straps were left out for clarity but will still be there. The second version didn’t have anything preventing things from flying out from the top so now there’s a front flap with a little hook that can be attached to a small ring on the front. The tent featured in the first version is put on the bottom strapped in by two ropes. kinda looks like a hotdog

The sword is just a normal sword, just with a bit of a pointer tip, how it doesn’t break is something I’ll blame on magic.
With the sword there comes a sheath that has straps that are attached to the side of the backpack. you might be asking, where’s the chape? To that, I say, on the layer behind the background.

Simple Idea for a wooden plank shield, if the wood breaks you just replace the parts that are damaged with new boards and leave the ones that are fine in place. 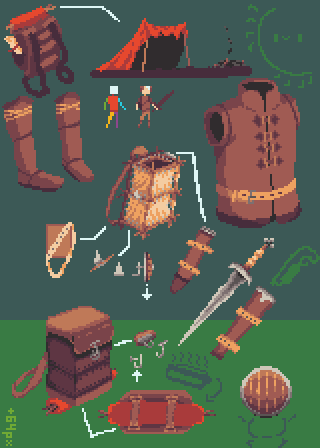