Hi everyone, I have recently been working on a game called “Fear Labyrinth”, and I would really appreciate some feedback before I completely finish it and put it up on Google Play. Although there are buttons on the interface, the game can be played with arrow keys on a PC (Z and X on level 7 as well). The feedback can consist of anything that might improve the game, and just commentaries are also welcome! For example, if some levels feel easy, hard, confusing etc.

Here is the game: 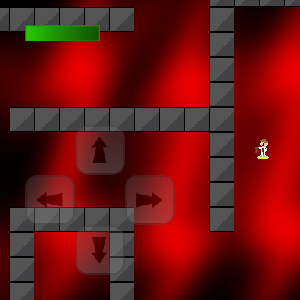 Controls: Arrow keys Every floor has an objective. It's up to you to find out what it is, as it is the only way you are going to escape.

I am new to flowlab so I dont know how to rate it. But I dont know if you can kill those demonic flying things, if so show how to defeat them as some part of the tutorial

Hi, do you know if the player stops randomly, or when you do a specific action?

No, It Just Does It Randomly

I took a look at the code and found the problem. Look in your run&jump bundle in the player. The way you have the movement code set up is that on a keypress, the velocity is set to 6. However, on key-up, ALL velocity is set to 0. This means that if a player is moving down by pressing the down arrow, and they press and release the left arrow to move slightly left (while still holding the down arrow), they will completely stop because the key-up of the left arrow causes ALL velocity to go to zero. This makes the movement quite choppy. I think you could probably solve this by setting all the keypress triggers to “repeating” as shown in the image: 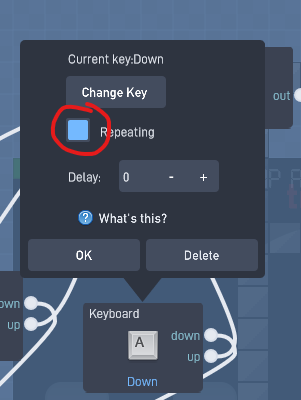 Thanks for looking into this, I’ll fix it right away! This probably won’t affect mobile gameplay, though.

Probably not, depending on how you have the on-screen controls set up

If you go to the main flowlab page and go to help, then select helpful examples it shows a lot of different ways of adding features to characters, such as health and stuff.

Here is a link if you get lost: https://flowlab.io/resources

I have made certain changes according to the feedback given:
-the tutorial key was made to be collectible but not solid;
-the first spider enemy in tutorial was brought closer to the spider net, making it more evident on how to kill them.
-The title now directly leads to “select level”, where the player can view a manual that explains most enemies and what they do.
-The player will no longer stop unnecessarily while going diagonally on a pc.

Also, here are a few screenshots from the mobile port (just for fun):

Can i make a review in youtube for my Game Review series!!!???