Now that the Flowjam has ended (congrats to PixelPizza), I would like to show off my game entry.

I would like to thank my partner in the competition, Baron Wasteland, on all the artistic help with this game.

I would also like to thank @Eric_Matyas for the easy access library for sound and music on Soundimage.org. 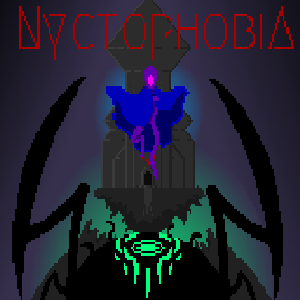 This game has some seriously dark tones and isnt for anyone who is afraid of the dark.
You explore an old temple to find ones true self and individuality.
Face your darkest fears in the darkness of the temples.
May the light lead the way.

I really liked this one! The lighting effects were top notch and the run cycle and monster animation were super creepy. I look forward to the updates and exploring it further! Nice work.

No offence to pixel pizza, but this game should have won! It was all I attempted to do in my game but with better graphics, depth and game mechanics! You made an epic story, with an epic story line, good game play and solid graphics! Honestly, You could put that on steam and sell it – i’d buy it! It’s a great game (although maybe make it longer, so you could sell it for more). I’m glad you got an honourable mention, you deserve it!

Glad you liked it!
The game wasn’t near finished when Flowjam ended and there were several mistakes I’ve done when it was submitted. I would like to fix a few things before we release a demo but the game itself was planned to be a lot longer.

Lv. 2 - 4 were built all on the same day with no doors/gates. And a few things had to be cut out to finish for the Flowjam. Please look forward to future update.

It was fun for my first we ever game jam, really couldn’t have done it without Baron Wasteland.

@“JR 01” Same! I submitted with loads of mistakes and bugs and had to fix afterwards (Even thougb the game is still broken)

Really great game! And Your welcome!

This game is one of my new favorites on FlowLab - it’s so well executed, everything fits together, nothing out of place either! I only just started the story, but so far, it’s been pretty immersive! Can’t wait to play it more, so good luck!

@rcreger I know what you mean. Playing that was enjoyable. Keep it up @“JR 01”

Just fixed it where you dont get stuck on corners of the ledge.

Thanks, this will be a major improvement

I was just playing this yesterday (after I added it to the featured games list) and was still getting stuck on ledges.

This was my first Flowjam game and the first game I made with @Baron_Wasteland. Many of you know that this game was unfinished when the Jam ended. Making the game long, frustrating, and unfinishable.

This update is the original idea for what I wanted for the first Flowjam.
Let me know what you think about the game.

Well, this is cool

I couldn’t beat the game regularly (lag and whatnot), but speed hacks seemed to work

That’s another thing that was updated as well, This should have greatly improved performance because I redid a lot of collisions and proximities.

Yeah the jump control could be fixed a little

Nothing’s wrong with the Jump Controls, it’s what was originally intended.
Jump is set by the speed of the character, and there is no air control.

Nice! I haven’t tried it yet, but it’s great to see this one get some love