Hi all! GALACDRIVE is a game I plan on finishing before the end of summer 2022. I figure I’d log development here, and also use it as a feedback form!

If you wanna try the game out, it’s available here: Flowlab Game Creator - GALACDRIVE
Please be aware that you may encounter weird stuff if I happen to be testing stuff the same time you click play.

I will log the game’s development every tuesday near the end of the day. Lemme know what you think of the game! I got a lotta plans and will maybe share em around! Thank you!

I saw this on the discord, I love the game and how polished it is

Thanks! It’s my goal to make a game that feels good to play. I’m a little obsessed on makin things look tidy lol. Hopefully it doesn’t slow down development too much.

Take your time, the more polished a game is the more attention it receives!

If a game is focused on polishing though, it won’t have enough gameplay to keep it going (usually, unless it’s a pay to win mobile game lol), so make sure to keep taking steps forward while polishing

This is Nice!! Love the weapons and how it rotates with the ship. I played on mobile but it was a bit hard since it doesnt have fullscreen. You could add it to the menu or in the game corner

This is very epic. Very nice

this game is amazing. it’s addicting and fun to play and the powerups are fun to use!! (i think it goes without saying that the art is outstanding and polished)
i got to 471 lightyears without dying!
i recommend a death/game over screen and a fullscreen mode!

What a fun, polished game! I must meme it soon.

That’s being worked on next! I won’t make a roadmap since I’m not sure what I’m gonna do and am gonna take an adaptive approach to development. I have long term ideas but I have em noted down for when I actually implement them.

some new stuff is getting added to the start screen very soon, along with a fullscreen button. Thanks for the kind words!

since last week(may 3rd):
-added a scoring system. It ticks up once every half second, and according to (probably incorrect) math it takes 2.7 hours to max it out past 99999. This scoring system took literal hours because of how flowlab works and me just copy and pasting sprite after sprite after sprite.
-something special happens past 99999 but youre gonna have to manually change code in the game or play an unfinished game for 2.7 hours straight.
-experimented with stuff like fullscreen, a screenshake concept and other things. Added support for a potentially panning or shaking screen in the future, which someone suggested to me a weekish ago.
-fixed that one forsaken bug that would keep the ship moving post tap. God I’m glad I fixed that.
-currently working on a fullscreen button that should be available soon
-logan got done with his AP tests, so he’ll be able to make music faster again
-a lot of school stuff and other things I’m doing have swamped the past week, so sorry about the log being a little shorter than normal.
-instead, here are the short term plans: try to make superlaser’s effect even cooler, add toggleable fullscreen, add a flashing lights warning, make the death screen neater.
-the big medium term plan is to add a complete death screen with your score and an option to restart. Not sure how long this is gonna take. (edited)

since last week:
-added a fullscreen toggle button.
-added a warning before the game fully starts of the flashing lights.
-added a “door opening” animation every time the game restarts/opens.
-displaced most home screen items. More of a QOL thing for myself; makes the home screen much easier to edit.
-tuned up the score display’s animation.
-added a new UI element to the other side that documents boss and area progression.
-added the “difficulty factor”. this number changes how fast asteroids spawn and the speed they move. The difficulty factor slowly increases as you play, replicating the “increased danger” in endless games. This and the fullscreen option mean GALACDRIVE can be played like a real endless game now.
-started making ideas for achievements, partly inspired by the “missions” suggestion someone gave me.
-the counter now stops counting when you die.
-greatly improved the death animation for the player.
-added slightly more detail to the health and shield bars.
-fixed the error where music starts 1 second late upon playing the game for the first time.
-started some infrastructure work on bosses, the death screen, and an options menu.
-this week has been sort of “redemption” after my slower working week last time. Death screen, a pause menu and options menu are planned next but I have no clue how long they’re going to take.

since last week:
-pushed this log back to wdnesday rather than tuesday, since development got a little derailed on the weekends. will resume to tuesday tradition after this
-added black outlines to the start screen stuff, so it doesnt look terrible when the game starts anymore
-more infrastructure stuff on bosses, which includes the boss spawner, ironing out ideas, a final boss bar and other random stuff
-added a death screen after you die. basically all the things that dictate when events happen and when stuff spawns go poof when the player dies so the game ““pauses””. the death screen means you can now take a screenshot of your score to send to friends, family, and random people on the street.
-the death screen displays your score and your boss progress (of course we need bosses before this is of use)
-changed up the progression UI element on the side slightly to match the other side -
started implementing sound effects - very likely temporary stuff
-updated the background - it looks way better now and was a nightmare due to copy paste shenanigans
-death screen has restart and leaderboard buttons - leaderboard is W.I.P. and i’m gonna iron out this severely un-ironed death screen before doing any of that
-started work on a pause menu and experimented with game flow to see how flowlab’s built in “pause” works
-unforgivable sins hidden away in the code
-added a sound effect controller for said sound effects - again very experimental
-added a music controller to control the music audio - when settings are implemented it will be given way more attention
-came up with a hypothetical way to use trigonometry to make my own homing missile code which if done right could mean galacdrive be made with 100% of my own code
-next up: ironing out the death screen, fine tuning some more stuff, attempting to fix annoying bugs.

NOTE: since the death screen is done, and this is a general thread, I encourage you all to send screenshots of your best run results! I’d like to see how far people got.
Personally I challenge anyone to crack 400 as a start. I barely did and I made the game. 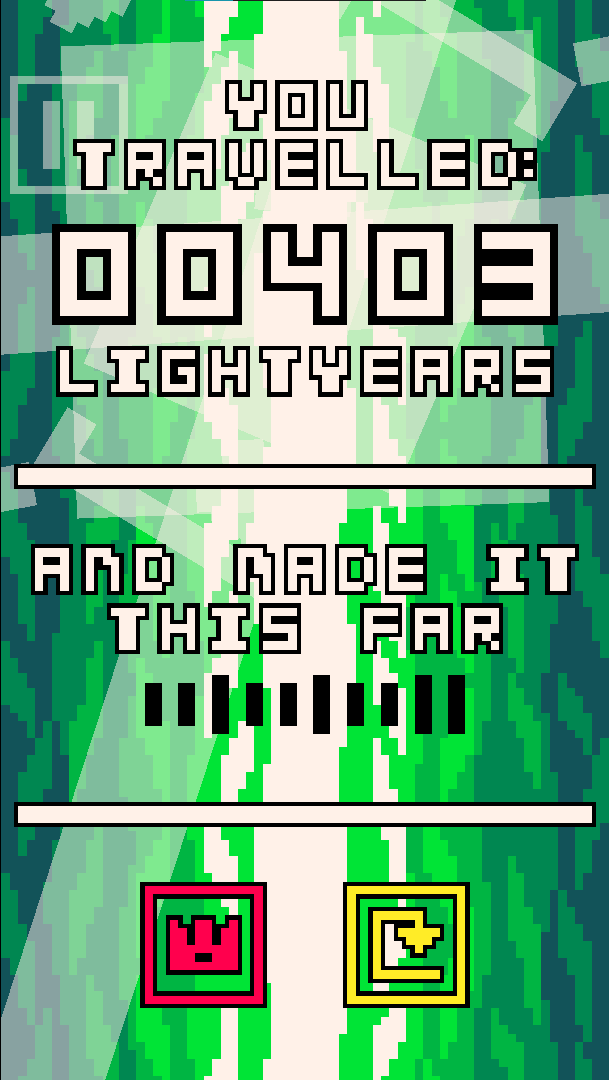 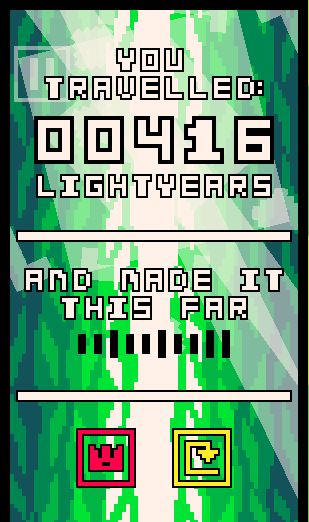 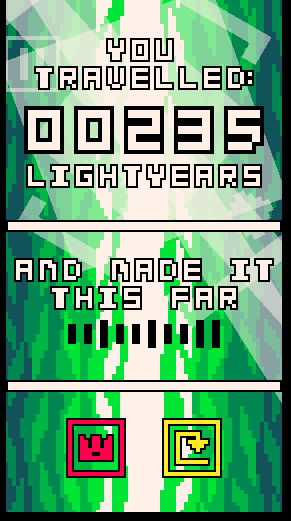 416?? that’s insane. I can’t believe someone broke that already! bravo!

I can’t get the game to start anymore 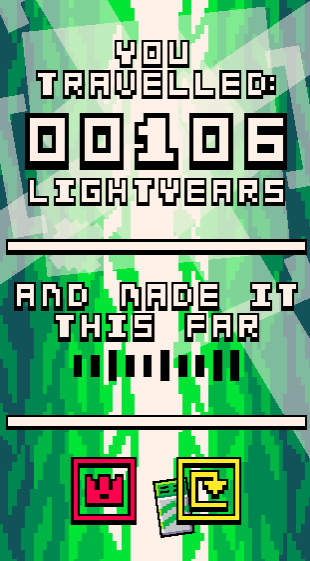