Hi there. I’m getting close to finishing my level three and calling this one done for now. Lots could be improved about this game, I know, but it’s playable and that’s my standard for my students…however, my level three is frustrating in that it is REALLY hard to kill the beetles. I’m shooting honey at them like crazy and they seem to get hit but hardly ever die. I know they spawn erratically, which I like as it simulates a true hive beetle infestation…but they also sometimes appear to go behind the hive cells…I’d like some tips on how to make level three winnable by killing at least 15 beetles before you die or all of the larva are eaten without lots of frustration. 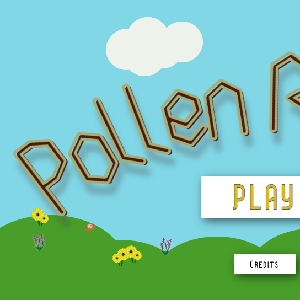 # Help The Bees >**Did you know** that bees pollinate __1 in every 3 bites__ of food that we eat? >If bees die off, humans will soon follow. Bees are under threat from climate change, varroa mites, and pesticide use. >Help the bees survive by...

HI there!
While I was playing it one of the issues that stood out the most was the fact that the player doesn’t have any time to react, the player has a few seconds to see the beetles and try to shoot honey while adjusting their movement. It might be more reasonable to have the beetles have a period of time where they pause movement for a bit, this allows the player to have a bit of time to see and react to the situation.

One way you can add this is while the beetles are trying to eat the larva have it take a few seconds to fully eat it, this way the player has time to adjust and react to the movements of the beetle.
One more suggestion would be to increase the beetles size, they are very small and difficult to hit, especially when you can only shoot in the up, down, left, and right directions.
The last suggestion is to make the movement and aiming controls separate, this might actually be the larger problem as it is very difficult to aim, to aim you must use the arrow keys, but they are also the movement controls, this means that while the player tries to compensate for their constant position change (what I mean by this is that the player slowly drifts downwards/upwards) they also have to aim at a very small target and moving left and right can ever so slightly change where the honey is shot.

I hope this feedback can be of some use to you, the game is looks great and the concept is cool!

Also when you say “spawn erratically” dose this also imply that you intended for the beetles to disappear sporadically as well?

Thanks so much, @glowbug! I think your advice is great. I’ll have to figure out how to do that. Would I just put a timer in a delay after the beetle collides with the larva? And the larva are set to destroy after colliding with the beetle, so not sure how I would handle that.

As for the aiming controls, the “honeygun” is a separate sprite attached to the bee…I do want it to be able to shoot with the bee, but not sure how to change it to what you’re suggesting.

I intentionally tried to make the bee “hover” kind of like real bees do. I’m sorry, I’m a very visual learner. Sometimes I just need to see it to understand!

I can definitely make the hive cells, larva, and beetles a little bigger…true those dang things are small. I was trying to keep them in proportion to the bee…that’s what I get for being a design teacher and not a game designer.

This is my first game and I’m loving the learning so far. Much gratitude for your advice and assistance!

About the disappearing…NO, I’m not sure why they are doing that. I like that they seem to be crawling all over the place…but they kind of go behind the hive cells and that seems weird. I tried fiddling with the display order, but then the larva were hidden behind…if the beetles could remain and just kind of run off the screen that would be preferable to disappearing from the screen. Any idea how I do that?

You’re welcome, I’m happy to be of any help!

If you want to do this all you need to do is when the beetles hit a larva it waits for 5 second and then it sends a message to the larva. the larva will have a mail box connected to a destroy behavior instead of a collision. I’ll get a screen shot of what the code should look like soon.

What I mean by separate controls is allow the player to be able to move with the arrow keys and maybe let the player shoot with different keys, for example, if the player uses WASD for the aiming, if the player presses W they will shoot honey upwards, if they press A they shoot to the left, and same for S and D.

If you want to keep it in that’s fine, but you can also have the been move down and then up, basically on a loop that changes their velocity from positive to negative making them slowly move up and down instead of only up or down, If you want I can make an example.

From a game design prospective I think you should also desaturate the sprites for the cells, they take too much away form what’s actually important, what should stand out are the player, larva and beetles, the hives make everything too messy and hard to see.

For you’re first game it’s really well made and it’s great to hear that you’re enjoying it.

Now I found out the main reason for why all of the problems are happening.
You set this timer to repeat which makes the beetles reposition themselves.
What this basically means is that the timer will go off and randomly put the beetle in a different position, and this repeats, forever. 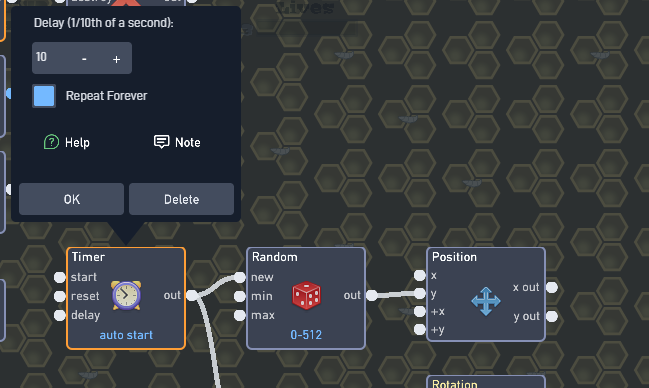 Also it would be more interesting if as more time passes more beetles spawn so if you sit around doing nothing large waves of beetles will take over.

Here are the Screenshots!

This is for both the lava and beetle, make sure that the Message behavior is set to “Send to last contacted object” or else it won’t work. 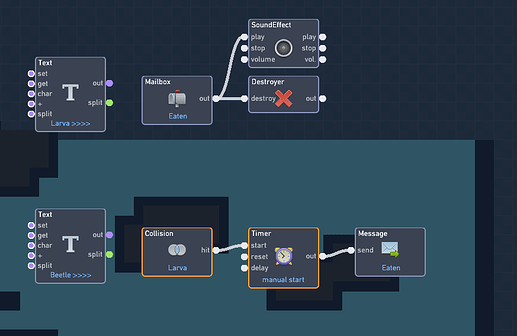 Here is the hovering code.

ooh, YES I love that suggestion. Reminds me of Tetris as you get close to the top.

Thank you so much, I will definitely desaturate the hive cells and fix the sizing issue in the other sprites.

Just realized issues with level 2 that this might help me fix with the raindrops. I thought I was close but then I keep seeing all the issues.

Thank you again, so much! I really love this community!

Thank you! I’ll try that out tonight. Awesome!

No problem, most of us are here to help with pretty much anything, If you run into any problems with the code that I made then feel free to ask me, if you need help with literally anything else there are tons of people willing to lend a hand! Especially the user JR_01, they have made tons of guides, examples and have just been a big help to everyone in general, if you need something just type “@” and then “JR_01” to summon them!

Absolutely yes! I’ve used so many of the tutorials made by JR_01 already in making this so far. Super generous member!

Hey, looks like I’m late to the party. Is the issue solved or do you need any more help?

(Yes just an excuse to swing by and say hi lol)

I still have to swap out the code for the beetle and larva, but I spent time fixing the sprites for the hive cells and beetle. Let me know whether you think that’s enough of an improvement over previous visuals. I’ll make it work better tomorrow.

I realized one thing I had swapped the bars on the UI layer for the lives and beetles, so that could be one reason I felt like I wasn’t hitting any!

Thanks to @glowbug I have a plan…with hope it will all come together tomorrow. Thank you for asking @meburningslime.

At least I got to say hi, lol. Keep up the good work!! I’d love to see you guys put together a trailer.

They look great so far, it’s much easier to focuses on the beetles, if you want to spend the extra time to do so, you can add an outline to very important objects, for example you’re earlier levels require the player to collect pollen from flowers but the flowers blend into the surroundings too well, if you were to put white outlines on the objectives then it would still stand out even with a more saturated background.

I noticed that the beetles haven’t been fixed entirely, they still randomly change positions, you want to replace the timer behavior with a once behavior, that way it only triggers once when the level starts. You might not have added it in yet but it is one of the glaring issues with the game so I thought I’d point it out once more.

Also I forgot to mention repetition, I made some tile sprites a while ago that looked grate but they didn’t look good when they were place together in large patches, when you repeat the design it becomes more noticeable, it doesn’t look any good, if you randomly removed some of the cells it would feel a lot more natural. 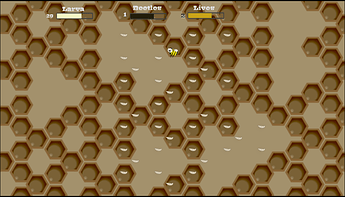 Thanks for that suggestion, yeah, I’ve been retooling the art and haven’t fixed the beetles quite yet…am hoping to get to that this weekend and fix it all. I redesigned the bears and made the level two rain darker to better match the color palette. I tend to go down rabbit holes on those kinds of details…

It’s funny you mentioned the flowers, because the background on that level is new this year, but I designed the flowers a year ago when in this unit with my students. I still have the illustrator files so I can easily add an outline to them. Thank you!

Great point! I moved them around a bit a few days ago…but not sure why the big patches show up. Hmmm. I don’t see the gaps like that. Today I fixed the placement of the larva, but am gearing up to fix the beetle movement hopefully soon. Thanks again for all of your help. It is so useful to have other sets of eyeballs look at this, especially since it’s my first game.

You’re welcome, I’m happy to provide help when I can!