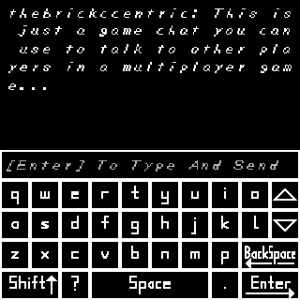 Just what it sounds like: an in-game messaging/chat system that works with multiplayer (I think?) and is scrollable (i.e. you can scroll to see everything people have said). I included an on-screen keyboard for mobile, though a real keyboard works as well to type stuff.
You can copy/improve on this however you want (Or if something like this already exists then let me know).
I haven’t fully tested the multiplayer aspect since I’m on mobile right now and that makes it difficult, so if you find bugs please let me know…
Edit 1: I found a bug where two of the same letter in a row will sync through as just one of that letter. Any ideas on why?
Edit 2: I found another bug where sending a message then quickly typing another message and hitting Enter causes the two messages to be displayed combined into the first one and an empty message to show up after it. Can anyone find why? I included code specifically to prevent this, but I guess it’s not enough?
Edit 3: I almost forgot, there’s an object I made in this game that contains every available Keyboard Behavior (every letter, number, and symbol) and as well its corresponding import keycode. It’s intended as a resource for mobile users so that they can add keyboard controls.