How do I detect if the player is in air

This is also not working

do you want it so the character can only jump when it’s moving? Currently, that’s what it’s doing. If you wanted it to be able to jump whenever it’s on the ground the ray cast would need to be set on “floor” instead of “ground”

I fixed that, also how would I add coyote time without the player being able exploit it and get a double jump?

Unless I use 3 ray casts

nevermind that was a terrible idea

I don’t know what coyote time is so I looked it up, is it the player being able to jump right after they fall off a block for a few frames? I think having a slight delay before the ray casts turns off the jumping and having the switch turn itself off might work, so if you still wanted to implement it you could. 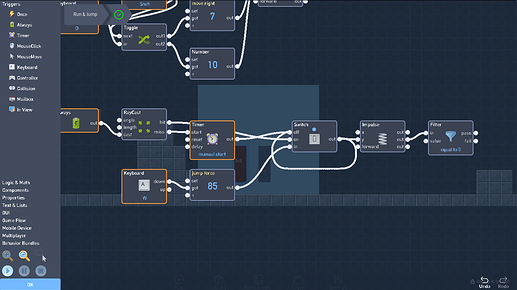 Doing that seemed to work fine for me

Oh, ok thank you I didn’t realize that the switch turning itself off after being used plus the timer would work. Thank you so much.