How to make a hidden wall (off screen)

how to make an off screen wall in game

I need a wall that doesnt move at all it stays off screen, which will prevent mario from waking off screen

Can you give more information? You can place objects off-screen if you want to, is that what you need?

like a wall that always stay off screen: stopping mario from walking off the screen

no, someone helped me with the camera, in the original game Mario can’t walk off the screen ,theres a wall

I can try something. Is it for one of the games I can edit? I don’t have indie anymore so could you create an object for the wall.

i created a wall in my SMB1 Remake: 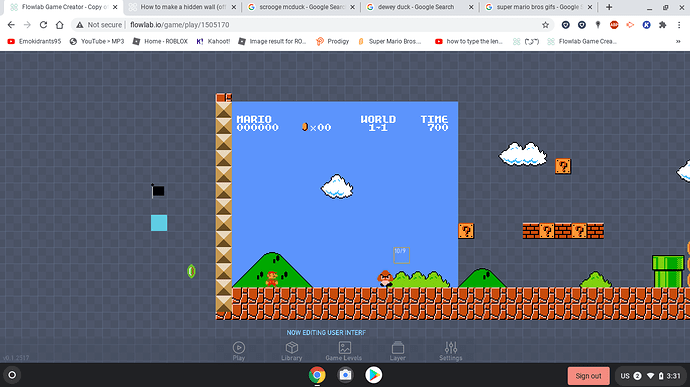 Ok thanks, I’ll get to work.

Does it work the way you want?

The camera only follows him one direction, so if you go right the camera will follow but not if you go left, so you can go off the screen.

Now that I’ve tried a few things I’m not sure if this is even possible I only wish you could make a interface object solid to a game world object.

I just need to know if it auto-scrolls or not

You might want to try rather than a physical wall, just somehow block movement left if you are past a certain x-value