How to make arrows stick to things

Hi Everyone! I am new but anyways here is something I need. I am making a game where you shoot arrows and I want them so stick to the walls or people. So how do I do this. I could use enable but it would stay in mid-air if enemy was moveable. So how?

Ok thanks take your time

im working on it but the code is bugging out for some reason. im really close so

one sec imma restart my computer just to see if that fixes this problem
IVE GOT IT!!!

Not sure what kind of game you’re making, but I have an arrow system that should work, though the code is a bit complex. Try the last level of this game, and Left Click to fire Arrows: 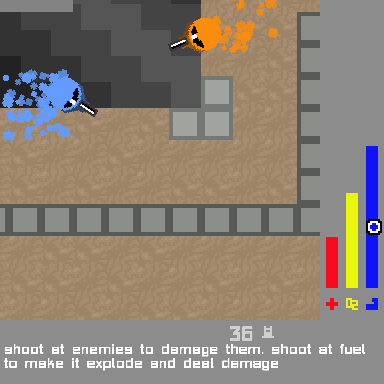 Made mostly on mobile in 2 weeks for the summer 2022 Flowjam *** Try to not run out of space in your ship as you fly planet to planet collecting supplies and fighting enemies... *** Let me know if you find any bugs or glitches or have feedback on...

Is that sort of what you’re looking for? If you shoot an enemy, the arrow sticks in them.

no that wouldnt work because it would be in the middle of the sprite, and would never change angle

as i said, i already solved this issue, but they just havent put it as solved, probably because they dont know they can

Yeah so, maybe if it hits the an object, it starts extracting that objects position values and sets its velocity to 1 while making the offset of the values based on where it hit the other thing.

uhh ill send you the video i made on how i solved it one sec (i think i may have tried that and it didnt work)
https://drive.google.com/file/d/1Vg2GHoMVhWynmKtVwL6l1SCt6nQPOFGL/view

that makes the arrow float dude

no it doesn’t, it just only works for static objects