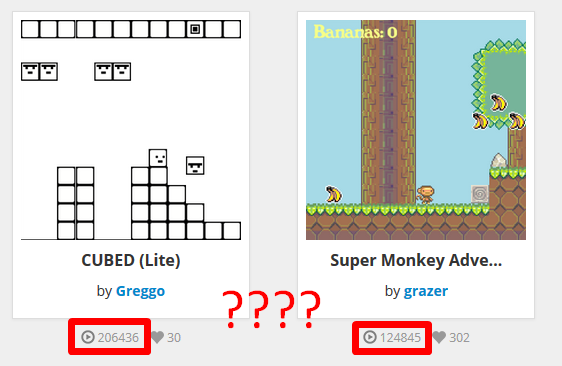 Huge difference between play count. And Grazer’s game has been there since the beginning, so it obviously should have the most plays. How’s this possible?

CUBED isn’t a bad game, but it’s possible that either there is someone that just refreshes the window on play or Greggo posted his game in several communities for allot of people to try.

Also Grazers game looks more like an example than a game… so that could be a part.

CUBED (Lite) is still pretty good, though @“JR 01” , and actually @Greggo , if you want, you could put your game on my discussion, Bored Reviews: forum.flowlab.io/discussion/6828/bored-reviews#latest , and I’ll give it a like (If I haven’t already) and review it for you!

“The more opinions, the better the outcome!” -rcreger

If you are quoting, this is my favorite:
There are only two things infinite; the universe and human stupidity.-Albert Einstein

Well, aren’t wrong, and neither was Albert Einstein, @meburningslime :lol:

You agree? Then you might just have SOME intelligence (in a joking way, of course XD)

One of the biggest things I notice is that CUBED has more plays, yes, but @grazer 's Super Monkey Adventure has more favorites, showing people actual other people had played it (And even liked it)