I found some bugs, help

An intrepid quartet faces off against varieties of the evil undead to extricate the world from a dreadful fate. wasd to move

Okay so, the zombies and cpu’s in the game are supposed to follow the player, but i have some things id like to fix:
1: the cpus don’t stop when you stop so they constantly push you around.
2: the zombies and cpus constantly run into a wall to get the a player so instead of running around the wall, they constantly get stuck.
3: the cpus are always bunched together and i wanted them to not get so close to each other.

sorry for constantly asking you for help @JR01 but would you maybe know how to fix this?

So you want to make pathfinding?

I don’t even know how to make that, mainly because I’ve never had to… pizza and jr are the only ones I know that they know how to.

Pathfinding is a lot more complicated then you think

I was there when it was first developed, I know how complicated it is.

No, you were not there when pathfinding technology was first developed, Slime.

Anyway, Shadow, it’s pretty complicated, as @Agent_Y said, but you can achieve a basic form of pathfinding through raycasts, and for a more jagged but less buggy version, you can also use this example, which helped me out a lot in my earlier days of AI Development. 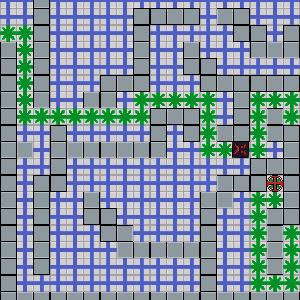 Note: You will notice almost immediately that this isn’t very good for bigger maps, which is where using exclusively raycasts comes into play.

pathfinding on Flowlab? Sure. But it’s not important here, no one cares, tbh

I at least helped develop the modern version.

You’re the one caring enough to respond, so obviously some people do. Also we’ve talked about it before in some pms.
(We’ve being my group)

Being an older user is not an achievement. Providing something to the community is. And whether or not you provide much anymore is debatable.

Anyway, back on topic. Sorry you had to see that, Shadow. I hope the example I showed you helps, @ShadowGaming. Feel free to ping me any time if you need further help. I’ll be there (=

I won’t rebut since you won’t listen anyways

okay, will do, thank you

What did you try to do?

was that reply to me?