I need some advice

You’ll just have to edit/add on to it for each frame. You could probabaly get advice from @glowbug or @Baron_Wasteland

Ahh, ok, lol. Glowbug is really good at this stuff, lol. Could not have made this as good as it is without him. I feel kinda bad that I keep bothering him with this though. I don’t wanna take up all his time or be annoying or anything

there’s an option in the sprite editor that duplicates the frame, if you wanna do that. otherwise, the sprite is very simple, you can draw it again pretty easily, I’d imagine

you definitely don’t need any more shading to this, it’s the upper limit of what you’d want for a sprite of this size. I think it looks pretty good! although for the helmet, you might want to change something. spheres are a bit tricky to get shading and highlighting right 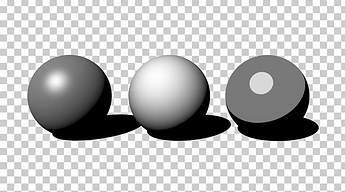 image728×406 88 KB
here’s a good example you can use. the point of focus is the highlight, notice how it isn’t around the rim of the helmet but rather on the front part. try that out, it’ll look much nicer (:

other than that, I think the sprite is very cute and nice looking! 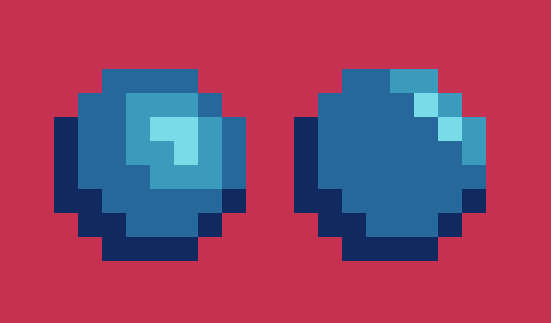 simple thing I drew, it doesn’t look that great but it illustrates what I’m saying. the rim highlighting (right) is what you’d want to avoid cause it’s kind of unrealistic, shading wise

Nice!
You probably won’t have to worry about shading, right now it’s fine as is, although I do agree with Baron, all you need is to mess around with the shading on the helmet and you’ll be good.
The light on the leg to make it a bit round is nice, you could experiment with the torso too if you want but I’d say, at the size of the sprite, it’s looking good.

For the feet, the right foot (characters right, your left), has two pixels that are darker, just replicate that on the left foot but just a bit darker, that’s really all you need if you want to give it a bit more shading, really, if you think it looks a bit messy then go back and try to minimize some of the different colors in an area.

Animation for this is really up to you, for this sprite it won’t get very complicated, I would recommend using code to give the player some more life, you can use the size behavior to make the player squish and stretch when they jump or land on the ground.

For example, if you’re making jumping animations then just lift the arms up, you can try to make a smoother animation but for now, with this sprite, one frame would probably be enough.
A walking animation would probably consist of two frames, one of the left foot up, the other of the right foot up, it’ll be a bit choppy but it works.
Take reference from older games like SNES Mario, or games with simple art like Undertale, simple animation that works well.

If you’re curious about getting into more “advanced” animation then you’ll want to practice with something else to get used to it.
One helpful thing as a reference is the “Twelve basic principles of animation”, it’s about all the different things used in animation.
Just start with something simple, to learn squash and stretch I made an animation of a ball bouncing, no shading, no color, just practicing the main motion.
There are tons of videos out there that explain each of the 12 principles but remember they aren’t the absolute rule, just a few things to remember when making animation.
I wouldn’t recommend getting into this kind of animation though, not yet at least, just practice basic animation until you feel like you’re ready for the next level.

And don’t bother worrying about me, I don’t mind that you’re asking me, it’s kinda the whole point of the forums, if you got a question then just ask.

I personally think the big 12 is a bit much to learn for a basic sprite animation. Although they are important if you wanna gey real serious with animation, you can pass on them for now if you’re just starting out.
For a sprite of this caliber, I don’t think it needs much more than a choppy mega man like animation (1 frame for jumping, 4 frames for running), that seems most appropriate for something small if you’re starting out @chrisdakiller

A good thing to put in the animations: make your character bob as they run, it makes it look more natural. And yea, as glowbug said, squash and stretch wouldn’t hurt

Or you could go the alternate skins route

Ohhh ok, gotcha. I’m gonna do that then!

Woah thank you for such an in-depth response! So I accidentally forgot to save and then my computer restarted unexpectedly (always remember to save, kids), but I still had a save from like an hour beforehand, so I think I got it at least pretty close to the original, just copying from my screenshot. Then I altered the coloring on the feet slightly, but not a ton, just a bit to make it look a bit nicer. Then I also went ahead and attempted to move the highlight to be more centered, but I’m not entirely sure if I did it right, or if it looks right. What do you think? 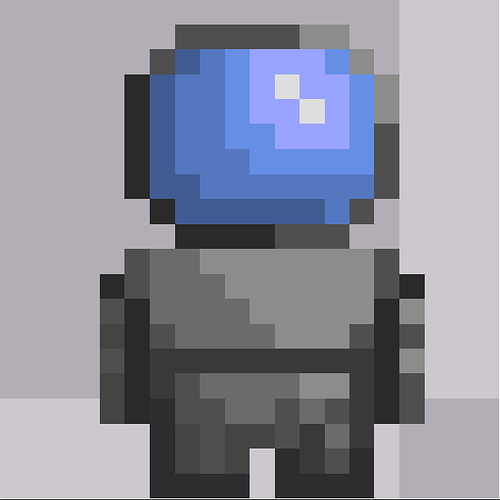 Screenshot 2022-01-25 9.33.12 AM631×631 8.47 KB
Anyway, if that is right, then this is my final product, which I think ended up quite nice. I just want to take a moment to thank you SO much for all of your help with this. Genuinely could not have made it this nice without you, lol. Looking back at my first draft for this sprite, I am absolutely amazed that it ended up this good.
So, now I’m off to the animation stage (probably still gonna end up requiring your assistance and feedback, lol). It doesn’t seem like it should be too hard to animate it, especially if I’m only using a couple of frames. Also, thank you for the tip about using the size behavior! I hadn’t thought about that, lol. I’m not really sure that I’m quite ready for “advanced” animation yet, though, lol. Although I will probably begin practicing some smaller things, like what you said about the ball bouncing thing.
5 Likes
TheDukinator January 25, 2022, 3:25pm #31

i would still put the visor as yellow… |:P|

Yeah, I mean it looks good, maybe push back the second to darkest blue to make it take a bit less space on the helmet so that the main shade takes up more space, but it looks pretty much finished.

And no problem, I’m glad I could help.
Also, I meant to say, if you’d like to practice animation then use the 12 principles as a subject to animate, you won’t actually use it to animate anything for games and other things yet, just something to help you practice, kinda like what I said about the ball bouncing animation.

For example, “Straight ahead action and pose to pose” explains two different ways to animate, it’s only useful if you have a bunch of frames but it does remind you to keep in mind your starting position and ending poison as well as keyframes, more on that later. “Solid drawing” is something much much harder, so I don’t think it’s important for you right now.

Baron is definitely right, for now, you’ll want to take reference from SNES Mario, classic Megaman, Undertale, and other games alike, they have fairly simple animation consisting of a few frames, really they’re made of just keyframes.

Here in Megaman, you have 4 keyframes, which are also the only frames in the animation.

My bad for not clarifying that, if you need my help with the animation phase then I’d be glad to put my 2 cents in!

Ohhh, ok. That makes sense. Also, am I missing something or are the first two frames of that animation the exact same thing?

oh right, I kinda just pulled the first image that google spat out at me so I think it’s supposed to be a gif but I copied it as a png. That or there’s a single pixel that’s different.

Hahaha, ok. Just making sure I wasn’t losing my mind, lol. It shouldn’t be too difficult to make a simple animation like that, right?

¯\ _ (ツ) _/¯
well it depends on what you’re animating, a jump can be 1 frame so it’s just the same sprite but in a different pose, a run is a bit complicated, taking a look at the Megaman animation, there’s the first frame which is of his right foot down, then the transition frame, then the left foot down. You could remove the transition frame but it’ll look a lot more choppy.
Just sketch out each keyframe, no need for coloring or detail yet, just make sure you have the main aspects of the animation down.

I agree with glowbug here, just keep it simple. your sprite is very very simple so if you go too ambitious with the animations then it’s just going to look confusing. really simple animations are often thought of as worse, but it depends on the context, and for such a low res sprite, just do a couple frames for each action

Oh no! When I attempt to export it and upload it to flowlab it gets all messed up! 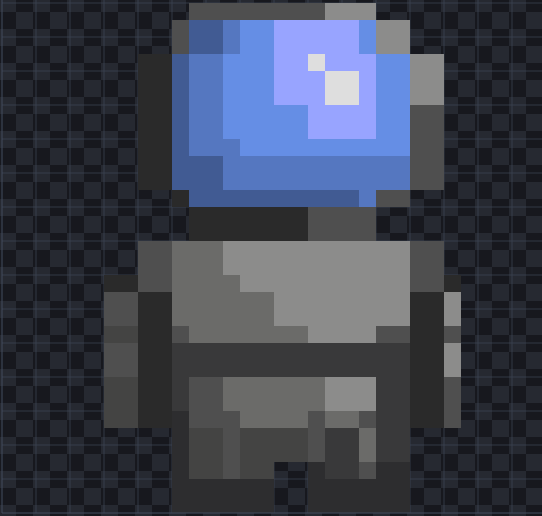 That looks like it was scaled to a weird size. Pixel art must be scaled strictly by halving or doubling the size.

Try resizing it in whatever editor you are using to 32x32 px - then it will match up exactly to a 1x1 block in Flowlab.

Oh, you are completely right. Somehow I was working in 20x20 that whole time

Thank you for pointing that out!