The only thing I will be adding after this is going to be reincarnation. The button unlocks at level 1k, which is still small compared to my record of level 2902.
Features:
New Ball: Quantum Ball, duplicates on hit and deals 2.5k dmg per hit. Clones last for 10 seconds.
Ghost balls no longer cost 72 million to upgrade, now it’s 5 trillion.
A few optimizations with sounds and lag in general.
Slightly altered rebirth calculations.

Bug fixes:
Ghost balls no longer commonly get stuck in walls.
Antimatter balls are no longer extremely laggy.
Poison balls make bricks take 2 times more damage, like they were supposed to do (they only did 1.8x)

Lol is it weird to love the flame ball better then all of the other ones?

The bomb ball is probably the best for early game and even late game since it gets you through the first 1k levels easily if you have enough rebirth modifier.

Not really, it just does splash which is really good for clearing out bricks when you can one shot them for the first 2k levels (antimatter is much better though, since the explosion is 3 times bigger, just costs a lot more and takes until around level 800 to get enough money)

read desc, it tells you

You have to get to level 100 first

Can you add a feature where the balls we unlock in this game are able to be dipped in sulphuric acid?

My good account at home is past 3k, it just took me over 10 octillion rebirth modifier. 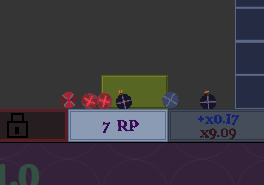 Congratulations Galactian, your game has been memed.

On an unrelated note, will there be lore for this game?

Oh yeah, that bug happened to me too in Gamougg 3 and 4. Basically, an object gets destroyed, but it’s sprite or the final frame of it’s death animation still remains. The object isn’t actually there though; this is a purely visual bug.

Weird. Reloading should fix that. That’s never happened to me, is something in console?

But the level is still there and it looks like all the balls stopped, meaning that it didn’t turn alpha to 0 but it did disable.

the balls probably look stopped because it is a screenshot, which is a still image.