I was working on movement behaviors for the player in one of my games. I was becoming quite frustrated with the jump code because the “switch” and “proximity” blocks weren’t doing what I wanted and expected. So I played around some more and noticed something interesting. Take a look at the images I have attached.

working1084×321 24.1 KB
In this picture, I assumed the code should work exactly the same. But it didn’t. Simply moving the “proximity” block back behind the key press block made the code work as I wanted. The player got one jump, then the switch turned immediately off, until the player was close to ground again.

I’m not sure if this behavior is intended or not. If it is, I had no idea, and it was quite frustrating to figure out. My movement behavior does work as intended now, though, since I have moved my code to match the second image.

Hi @johnpost
This is not a bug, it is an editor feature. 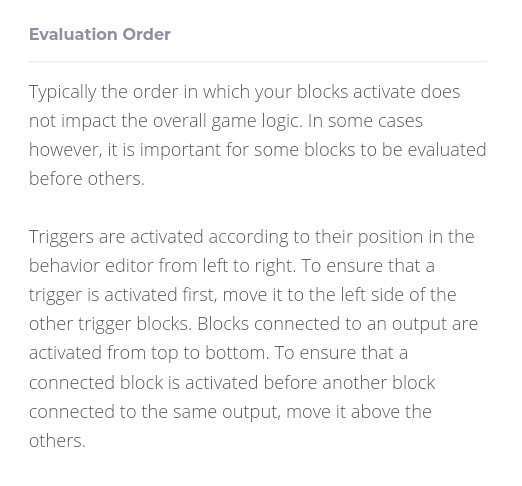 Here the explanation from the Help section

Wow, that actually helps a lot. Thanks!