Hey everyone! I just wanted to give an announcement that asked to join our discord server!

There is many reasons why you might not, maybe because its blocked on a school website or you don’t have the app, well Discord works best on phones and tablets, meaning its easier to access. If you have a phone but don’t have Discord I highly recommend it.

I did’t get it for years because I thought it was broadened into that “Social Media” irrelevant group but found it later to be an amazing messaging app. You can create servers and invite people as well as just messaging people directly. It’s a pretty amazing app that lets you do a ton of stuff.

So, make sure to click the link bellow and click “Join”. I’ll assign you a rank as long as you tell me what your flowlab name is and if we know each other here. 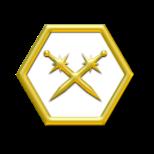 Check out the Crossed Sword Game Studios community on Discord - hang out with 36 other members and enjoy free voice and text chat.

I’d love to join, but unfortunately, I have a school computer so it’s blocked.

@AbstractGallery I explained this on the forum. It is best downloaded and used on the phone and is a much better way to access discord anyway.

You should also get twitter so you can tweet out important updates and maybe codes for your games or whatever you can also use web hooks to connect your tweets to discord.