New to Flowlab, but a game industry veteran. I thought it would be fun to do a game with my son. I try to learn what he’s doing (it’s fun for me to!) so that when he gets stuck, I understand enough to help.

We did the tutorial on how to have an enemy follow the player, but it just doesn’t seem to work. The tutorial was this one: https://www.youtube.com/watch?v=o2EWjy3qARo

We couldn’t get it to work. Our enemy is facing the wrong way which seems to break everything. When I did get him to face him the right way it caused new problems. Eventually I was able to make an enemy that moved left to right between two obstacles, but that’s not the goal. We want the enemy to move back and forth until the player gets close and then move to them, just like in the video tutorial.

Eventually, I trashed what we were doing and copied the exact set up that is in the tutorial, but it still won’t work. I have looked through it again and again, and I just can’t seem to see where I am going wrong.

The project is here:

Could someone please help us out? Let us know what we are not doing correctly? What are we missing?

Hi, so I checked your game, and I noticed what the issue was.
Basically, since the enemy sprite is initially facing right (the enemy on the video is facing left), you need to make some adjustments.

Inside the “Follow Movement” Bundle, open the Raycast behavior and set it to Any Type again.
Then, switch the timers outputs from this: 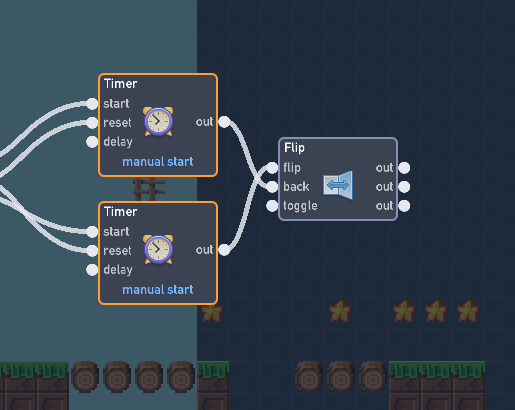 Don’t forget to make the first enemy closer to the ground, so it doesn’t fall on the spikes

I hope this helps and have fun

Thank you Beanies_bugs and Agent_Y (The video you are suggesting is the one we used as our tutorial)! Your suggestions are appreciated.

PixelPizza: Thank you so much! I appreciate that you took the time to look at the nodes and find the issue. As novices, we looked and looked and just couldn’t see where we were going wrong. I am still not 100% sure What is happening in that group of nodes, but I think that will come with more time spent in Flowlab. Your changes were the fix we were looking for! I think I will be looking into your double jump example as well, since ours seems to allow you to continue to jump until you are off screen…