Madness: the descent (in development)

Hello I made another horror game cause strings was no longer playable after last update.

Chapter 1 is playable now.
I didn’t just give special access to meburningslime this time.
The game is based on popular horror adventure outlast.
Even though I never played it.

Chapter 2 will come out sometime next month. 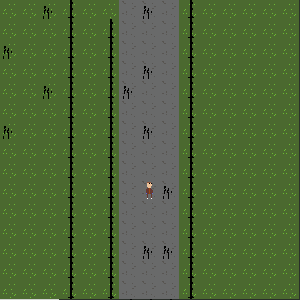 I cannot reply on weekends, I can only reply in very specific time frames.
So yeah.

It would be nice to get some replies

Nice game, I would like to see the next chapter

Some Feedback For Your Game

Lacks Directions:
I Was Wondering Where To Go And What To Do Once I Got In The House.

Art:
I’m No Art Master But It Can Be Better.

Music:
This Is The Least Important Of The Bunch But Adding Some Spoopy Music Would Be Pretty Cool To Add To The Scary Vibe.

And That’s All I Have To Say For This Game

OK. thank you for negative feedback (jk I don’t like my art either.)
As for directions and music, wellllll yeah. I do admit I don’t have a lot of simple games.
Ok, this might help. I made it so when you collide with something, that isn’t a puzzle, you are told what you need to do to get rid of it.
You need to get key, next to enemy, enter through door, take crowbar, head up and take the gasoline, then go left and get pliers. then head over, clear rubble, and put gas in tank, THEN you need to go back to start head up through gate ur done.

hey, do you have a dev team? i have a few ideas.

yes I do…
What are ur Idea tho

for example making the player having to pick up the flashlight or they can’t see well. You could add that.

actually, you could do it without help… Good luck

If you didn’t like first chapter, the rest of the game won’t be like that.
Picking up the flashlight, I can do, but would mess up future things I do with flashlight.
Batteries like in outlast however, that I can do.

how about you add batteries and a lantern or something?

Yeah ok! I could have it so u lose flashlight and need to use lantern.
The lantern would need oil to work, so, yeah.

Also, hold d and a at the same time, you can look behind you with your flashlight! cool, right?
Cool dynamic, the camera will go from sidescroller to rpg style.

Is it just me, or is this impossible to beat?

head all the way left, head up, get the pliers, go back to start collect gasoline,
(if you seriously can’t see that your blind.)
Head right, (chase will now start) collect the keys, head left again, go down in the room before the little intersection, get the crowbar from the open door, head right again, clear the rubble, put gas in the tank, (washing machine looking thing) escape sequence will now start. head to starting point, head up, open gate, fall into crack in the floor. And then you’re done!