I finally have all of the basic fundamentals working exactly how they should
Please tell me if you find any bugs or if you have an idea for a feature or a change that should be made!

WASD or arrow keys to move Space to wait a turn R to restart the game E to go down stairs F to stun enemy (can only be used twice per floor) M to return to menu Made in 11 days for the 2022 Level Up Game Jam with the prompt... 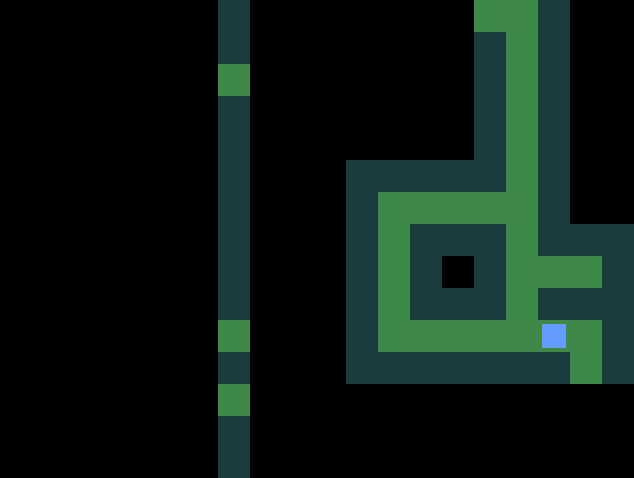 Woah, that’s weird! Do you have any idea what you did that caused that? I think I saw that happen once in testing a few days ago, but I haven’t seen it happen since

Can you add a score counter (how many floors you’ve beaten consecutively)? This would be a great addition

That is absolutely on the to-do list for this game!

I’ll take a look at the code tomorrow

Ok, thank you so much! Please note, though, it has become much messier in there since you last looked at it, even despite my efforts to try and keep things somewhat organized, so if you have any trouble figuring out what is happening in there, don’t hesitate to let me know and I will do my best to explain

Ok, the score counter has now been implemented!

Ok, so this definitely seems to be happening consistently now, but I have no idea what is causing it. I’ve been looking through the code and I’ve narrowed it down to this section right here (in the blackout object), but I don’t know why it’s causing issues 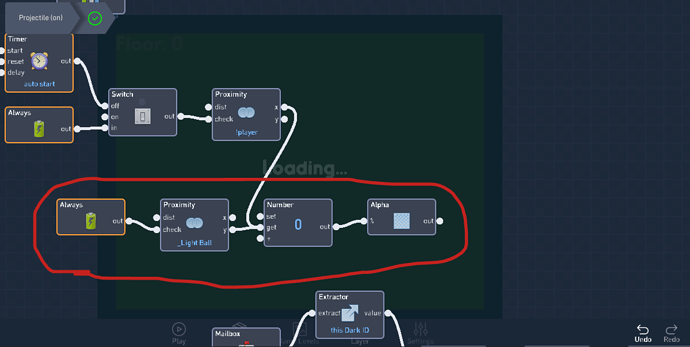 Edit: Hang on, I think I fixed it! Check and see if it’s still happening. I had some unnecessary code from a previous attempt still active and I think it was activating and causing issues.

It seems to be working well now! Good job, you don’t even need my help

Yay, I’m so happy!!! Please let me know if you find any other bugs though, cus I want them all out of here

Ahhh ok. Definitely going to improve those things! I just hope I can do it without breaking anything…

make it so you can move a bit faster lol

This one in particular worries me, because there are several timers used throughout the code that regulate the speed and I honestly can’t even remember where they all are or what exactly each one does, so that could potentially become a very large problem. The enemy AI revamp is definitely next on my to-do list. I’ve been meaning to fix him for a while anyway, but recently he became absolutely terrible as a result of my messing around with the line of sight stuff, so I gotta find some clever workarounds now, lol. Thank you for the feedback!!

Screenshot 2022-02-25 8.31.35 PM781×232 30.8 KB
few minor things on your mail boxes the were named different things one had a d and one did not also the message was sending to a different block that was not needed in the code lastley switches cant take on and off inputes at the same time so you need a timer as a short delay each time cool movement code though. also you could know what your doing and just not be done with it, you are updating it but if your stuck these were the problems i found
2 Likes
chrisdakiller March 1, 2022, 3:01pm #15

Thanks to @DraftyScienceCoat75 for requesting this! All it took was for me to completely scrap the old pathfinding method and spend hours meticulously building an entirely new (and much more complicated) method from the ground up, lol. But, seriously though, the game really needed this update, so I’m glad I finally got around to getting it done.
As usual, please let me know if you find any bugs or problems in the game!
Also, let me know if you would like to be pinged for updates

stun dosent work 2 times every floor it only worked once

Hmm, thats strange, it’s working for me. Are you sure you were directly adjacent to the enemy when you tried to stun him?

Yeah, you have to be right next to him in order to use it (or directly around the corner, but still adjacent)

Ok, I also just did a minor update and added arrow key support, because that was my second most requested feature (among my irl friends). Also, I have a few update ideas in mind, but which one should I do first?
I will just give you their names and let you guys vote on which one you think sounds best (you don’t get to know what each one is until after voting is done, hehehe