So I’m finally back from a few days of sickness, which I feel like I’ve been saying alot, but I return to my game and realize that there is so much that needs to be done. I kinda need a break from it, so I figured that I would ask you guys what would be a cool idea for a small mini game.

I never made a multiplayer game yet, so I was wondering if I could make a small minigame based off of that. Any ideas?

What I mean by minigame is like a PvP game that lasts only but a few minutes, maybe five max, but also a game that wouldn’t take long long to make like a week or so. Like I said before I just need a break from the Facility (Also waiting for it to get reviewed from BitWit and Ramshackle for further feedback) So I need something to do in the meantime.

I Heard someone say something about a flowlab Smash Bros (I think it was Gamer20 but I could be wrong) and I thought that was a great idea, but I wanted to make a game with characters based off of you guys.

So if you have any skin, outfit ideas or recommendations then please tell, but also select a type of game that you would think be cool. I might host a vote, after I figure out how to do that.

Are you asking for characters from our games? (kinda like how super smash bros is?)

No I mean like a character or outfit based off of you, like your flowlab forum icon. Since I’m a pumpkin, I would have a pumpkin related character. At least something like that. Since you have a wrench and a gear for an icon, you can have like a mechanic wearing red, with a gear symbol of the overalls or something. (Example) Or you could base the character from your most famous or trademarked game.

I think this idea is great! but I’m still trying to get my icon back on the new forum, you seem to know how too, would you mind sharing.

@Gamer20 was banned from Flowlab.io so yeah the smash bros is not going to happen
Also umm yeah I’m pretty sure you know what character to make off of me Also you could make like a racing game on top down like similar to fall guys also have a very colorful theme too it look nice and ”STUFF”

Wait, he got banned? How do you know?
But just so that I can contribute to this topic, outfit recommendations I have is maybe a ninja outfit, or you can use an outfit that is remotely similar to my character/avatar.

my profile picture was this:

but now that the forum is changed I haven’t figured out how to put it up again. I was thinking maybe for my character could be a race car driver or something along those lines.

A living wrench that throws wrenches…idk

@buy3get5free click here: https://flowlab.io/users/profile
You can change your profile here, but once you’re done, you have to log out of the forums and Flowlab and log back in for it to show.

Ok thanks a lot, I was having a bit of trouble figuring that one out

are you doing it for everyone

Well, not entirely sure what you mean by “for everyone” but if you mean that I’m making this game for people then kinda. I’m just bored and wanted to do a multiplayer minigame with characters that are based off of you guys. If you want to be a character in a game, then send me some submissions or ideas on outfit design. I do want most of the characters the same shape though, but different details like hats, melee weapons, and facial features that describe who the character belongs too.

sure im in I want to be in it 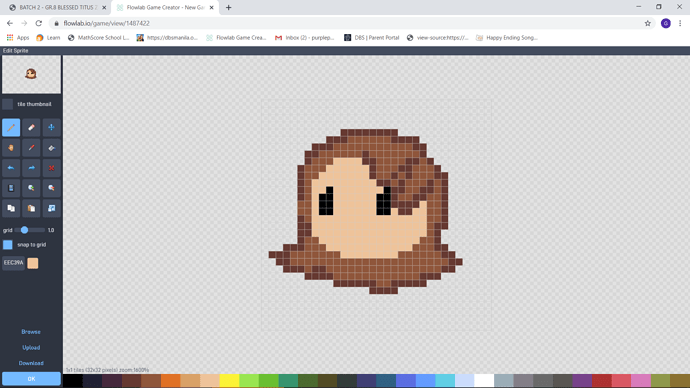 Heres something I am currently working on haha

I don’t want to bust anyone’s bubble, but there may be a small chance that this game will never be made in production. Juggling school work and game making can be a little bit of a struggle and I thank everyone who supported this project, but like I said, it might not be in productions for many reasons. I will try my best to work on this project, but I’ve been so STINKEN BUSY!

What if everyone made their own sprite then posted it in this thread?

@buy3get5free that would help very much actually. Instead of me trying to guess what the character may look like, everyone could post what their sprites on here and could save me a lot of time. Even if it’s not perfect, I can still edit the sprite cause I want most of the characters to be somewhat similar, but I still need concepts.

Great! I’ll start mine after I’m done my school work.