Is there a way to have touch control and if so, how would you make it coorelate to moving a character? I would assume that having a virtual joystick like this would work.

Hey, @BrennanS. I have recently made a joystick example that can be dragged with your finger: 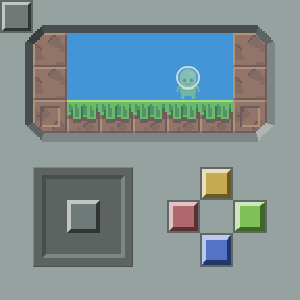 Joystick Mrk.2 This rendition no longer gets stuck to the edges! Also, The Yellow Button is just for looks. **Please** report any bugs you find in the forum: https://community.flowlab.io/t/platformer-joystick-example/32188

Something of note: Touch Screen and the Mouse Click behavior are the same.

oh… that is very complicated. Also, i think that if i made it compatible with mobile, it wouldn’t work or it would ruin the pc version bc you aim with your mouse and it would make things complicated and i dont have much time. Thanks for the help anyway and you are way smarter than me

Just stick with it long enough and you’ll become a legend. As it stands, this joystick is an early rendition of what I would like it to accomplish in the future. Also, the Mouse click behavior can only stand one input at a time, so if you wanted to put a joystick in your game, it will have to be implemented as the only control method/attack method/vision method. That’s why I kept it to a simple platformer example.

You could, however, make the character always face the way he is running, and you could have a separate button for firing a weapon.