Hello, basically I have a similar goal as to the previous version. organisms eat bits(food) to keep themselves from dying and reproduce. to avoid making similar mistakes to the V1 ive decided to work on starvation, reproduction, and size first, which are much more dynamic and risky. However thats not why im here. Basically Im having a similar problem as the last version: how the hell am I supposed to pass off genes? I did it kinda in V1 however it was very janky and unreliable. Last time I did it was by checking everything that was newly birthed and giving each one on you’ve just touched your genes(courtesy of @CodeAlpaca) Any and all help would be appreciated

So I’ve gotten a lot better at coding since then. I would use the Object Value to hold all the genes. So basically it would be a string of numbers. I’m not sure how many features you will have so a string of numbers may not work depending on how many traits you have

This can be more complex so you can check the first number, then the next 2, and then 1.

Basically, this just allows for slightly longer strings of numbers. Btw make sure to add these values into a Text first so you can do things like 04, 09, etc. Then just put that through to a “Text to Number”
Example: 1547

I think Flowlab only allows you to send ~25-30 numbers in a single string so if you are going to need more than that tell me and I’ll see if I can come up with a system. (Also if you need me to explain anything better just ask)

do you known charles darwin? i think he made t h e theory of evolution opr something

I don’t think that relates to how he can transfer the genome over to the children of the cells.

Could you make a small example? Also heres the link if that would help

I’m unable to use my computer rn (I’m on the phone) but when I am able to I’ll try to make an example for you.

But it could be an applicable theory

This is in the object spawning it 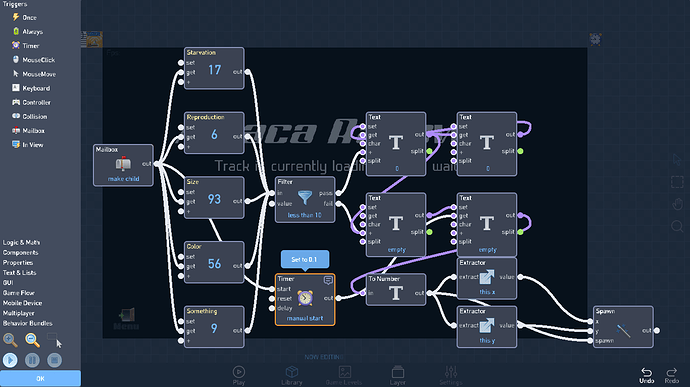 This is reading the Genome 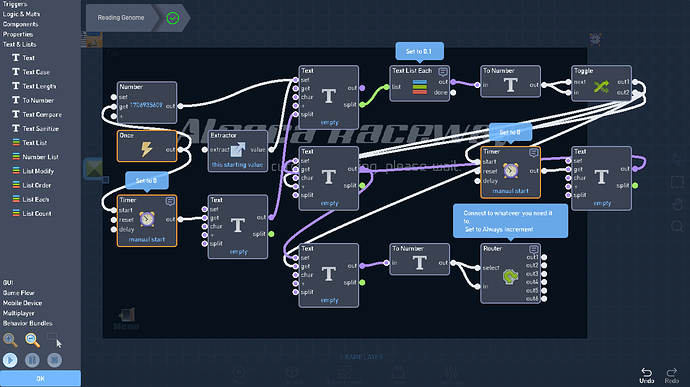 I just looked at the game and because they are solid it seems like you can also send these values through a message set to Send to Last Contacted, and by doing this you won’t be limited like the other method. If you need I can build an example of this

Thanks. Couldnt thank you enough

The first output is skipped, but then the starvation and reproduction take up outputs 2 and 3. The size takes up 1 slot because 0 comes before it, which takes up 1 space so everything runs smoothly.

How many possible traits do you plan on having? Because if it’s a lot I’ll make a different system for you which will be more effective.

Basically none more as every other attribute is decided by others. also I got mutations working