Alright, so many of you may have noticed that @LogicStudioz1 and I are currently making a remake of the famous io game Surviv. Although most of you probably think that we should stick to original ideas and games. But since surviv is such an easy game to actually remake, LogicStudioz1 and I figured to try our best into making it a fully working game.
Although I said it is easy, it has a very complicated inventory system, but it can be accomplished.
Although it won’t be based off of the current update since surviv now kind of stinks, but we plan on redoing a more older update where there’s only 12 gauge, 9mm, and 7.62mm guns or red, yellow and blue weapons.
Anyway this discussion is going to be used as update log for massive updates, preferably for the community to see. If you have any requests, ideas, or just want to point out something then you can just say something through this discussion.
Features this game will include.
The map will be kind of small, not the same size as a normal map. There will be a set amount of players, which we are debating on making this game multiplayer or not, which isn’t our main priority, but an idea in concept.
Anyway I hope you like the idea and like I said, if you have any ideas, or just simply want to point something out then please do so on this discussion. Also polls might be hosted on here to get the communities help in this project as well.

Here is the link if anyone wants to try it out for themselves. It’s far from done and its in constant update so don’t be surprised when something is really distorted to something: 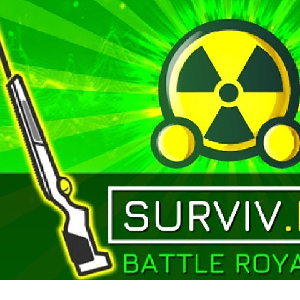 Welcome to surviv.io, Flowlab version! Awsd to move. Press f to pick up an item.

Thanks for making this Maniac!

Okay, this is kind of a reminder of what all is currently in our game and our top priority for the next update.
We added some shrubbery such as trees, bushes and rocks in the game. Which all break if you punch them.
We also have an oil barrel, stove, and table but only two of them break, but don’t explode. The table needs some updating.
We also added a shipping crate which you can walk in. Part of a house. We still need to work on the doors and add windows and add more interior in it.
I finally finished the helmet inventory, but still need to add buffs that you get form them and finish out some bugs, but it seems to be done. Also I still need to finish the backpack and armor.

Our currently priority is to finish the punching animation for the player and adding the rest of the items to the game so we can start working on the inventory system.