I’ve been working on an update behind the scenes for a while that I’ve just deployed: Logic Gates.

I initially started working on it thinking it would be super simple, but as is often the case, there were some details that made it trickier than it seems at first blush. I implemented all the basic two-input gates ( https://electronicsclub.info/gates.htm ):

AND
OR
NOR
NAND
XOR
XNOR

I didn’t implement NOT, since a NOR can be used as a NOT gate.

These behave pretty much the way I believe you would expect, however, they do not behave exactly like digital circuits since there is everything is processed in discrete steps, and there is no propagation delay. So this means that they are processed the way all other behaviors are, but it also means that some circuit types (e.g. S-R Latch) probably won’t the same as its electrical counterpart.

I also added a new “Download” button in sprite editor to download your sprites. This has been requested lots of times.

I didn’t yet fix any of the new bugs reported, since I’ve been sidetracked with this update, but I hope to tackle those next.

Well, guess I can delete my extremely complicated math system for diagonals now that we have AND gates.

Actually, I’ll do some testing first. I’d hate to replace a working but annoying function for an untested function.

Very excited to see this update. This will greatly speed up my game making process since I won’t have to make 100 equations and filters.

Oh, I’ll work on a game example for these functions as well. For those hundreds of people asking over and over how to make anticollision, welcome to logic gates.

Have you ever wanted the game to detect you in the air? I’ve wasted so much time making workarounds. Now you can just

That’s it. When you aren’t at touching anything, it’s active.

This update is huge for so many reasons.

Edit: I just noticed NOT gates were not added. Just plug in a NOR instead.

Alright, here’s an example tutorial for gate logic.
There’s a ton of great stuff you can do with gates or mixing gates, but this just covers the basics.
http://www.flowlab.io/game/play/754600 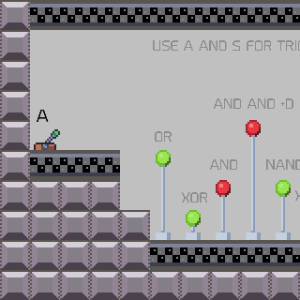 That was quick - nice tutorial!

Thanks, it only took like half an hour or so. Hopefully it will help people out that have no experience with logic gates. Time for me to pull out my old PS3 and find my sackbot logic, and redo that in flowlab.

So, umm, how would I use this to make Starblast have better movement… does and add up values or something?

Did you use my tutorial?

It might not be useful to you at all depending on what you want. For me, I can use collision AND ground, collision AND wall, proximity AND key press, collision NOR, and many other things that before used filters and equations. As for animations and up down left right diagonal, I haven’t thought of a good way to use it. For now, it just replaces a lot of IF logic I was using before.

Use these where you see fit in your games.

Couldnt you just use a number instead of OR?

Connect both ones to it

Of course you can.

That’s why I made workarounds like that. However, it was extra work and extra clicks. There’s always other ways to do something, but doing it faster helps me out.

If anyone needs more info on gates or have questions about gate uses, I can probably help. LittleBigPlanet was basically flowlab with circuit board wires in 3D. It’s one reason I got into flowlab in the first place, I was already so comfortable with wired behaviors. Now that we have gates, there’s a lot more that I can do with my games and examples.

this is very useful :o

@grazer can you make it to where only I can download my sprites, because I dont want anyone stealing my assets for their own personal use.

Also, could you make the extractor have a velocity: forward instead of just Velocity: X/Y

Theres something I want to test, but thats the only way it could work if it did

@CrimsonBlackGames removing the sprite downloader wouldn’t stop people from taking your sprites if they really wanted to. If I wanted to rip sprites from a SNES game, I could record my screen while I walk, jump, and do other movements, crop the video, convert it to a gif, pick the frames I want, and export the frames to a zip folder. I can do the same with your game, or just install dropbox and set print screen to automatically save screenshots to a folder. Flowlab is perfect 32x32 resolution, no blur. This is how people make sprite sheets.

I know, but its better than directly handing it over to them