Ok i found this bug and i dont like it 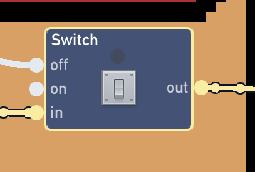 That happens to me all the time. When I go to view my game through the editor it’s hard to tell what goes on because the switch either reads off when it’s on or vice versa.

Yeah this is sometimes a copy-paste bug where u paste it and it reads as on, or you test the game in-editor and after playing it reads as on.

Tbh I’m not sure. I was just saying I have the issue as well and I have no clue how to fix it, lol.

@grazer can you fix this?

It’s just a visual thing, doesn’t actually affect the code.
If you can reproduce this consistently, it would be easier to track how to fix this.

Hey @Cuts_ups, like @JR01 said - the logic is working properly, but this is an annoying visual glitch with the light an icon display. If you can remember the steps that caused it, that would be super helpful for getting it fixed