RELATED to the topic I sent last night, how would I make someone flash when hit and not when regenerating HP, the phantom object is where the issue is(Also I will have enemies with regeneration so ineed info for that too)-Flowlab Game Creator - The Places Beyond(Beta)

Make it so they only flash when they get hit. And turn a switch off if they are regenerating hp.

That would mean that I would have to rearrange the entire HP system, is there a way that I don’t have to do that

Make it flash if it takes damage, not when health changes.

Yes but I would have to reorganize ALLL of those connecting lines to that…its a hassle, I just wanted to know if I could do it differently, if not I will go straight to work…errrgh

It’s not my fault you didn’t think about the future of your coding.

…I wasn’t blaming you I was just asking for a better solution, if there isn’t then that’s fine

Ok, so your health is 5000, when you get hit a number goes into it to lower it. You are having the 5000 go into 200 Number → Color. This is causing the character to flash when it regains health because a number is being outputted from there. What you need to do is have the numbers that go into the 5000 also go into the 200 → color. Look at the yellow lines 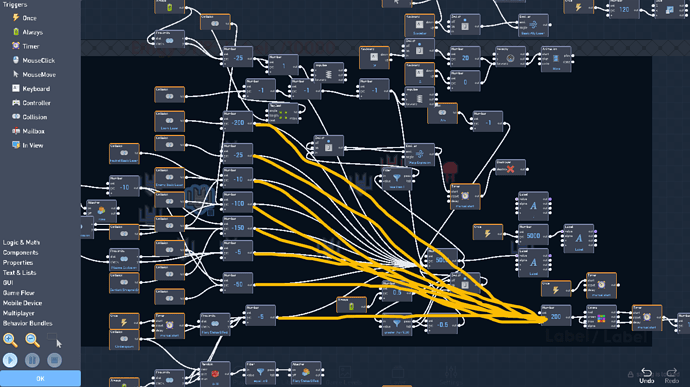 I think what I need to do is have all of the DMG Values go into the flash efffect, then put the Hp behind it along with the Regen, that way i Dont have to deal with regeneration triggering the flash, are there any flaws with this idea?

That should work fine.

NVM your idea works…for the most part, i don’t get why he is green constantly, check the behaviors again please.

It’s is probably green most of the time because the delay might be too long and it’s probably getting hit a lot.

…the output was wrong, i need help with something else though, click the link, you will see a giant red turret shooting at you, but for some reason after a while the bullets are slower, test out the link again and let me know whats wrong.

Not sure what’s wrong, I would assume it’s something to do with the impulse behavior.

Why not just make animaiton?

Thing was, it did this before I added in the impulse, that was why i added the impulse

EDIT: Oh, I see that you have different enemies doing different damage. But it could still be organized better- I’m having an OCD/autistic meltdown now-

Check the Doom Turret, why are the bullets moving slow?(It has nothing to do with the behaviors on the Object its emitting.)