So this was actually my side project for the Jam while I was working on Operation Delete with @Samuel_PixelPizza. I had no experience with isometric games, but I took the challenge to figure out the mathematics for the Flowjam. 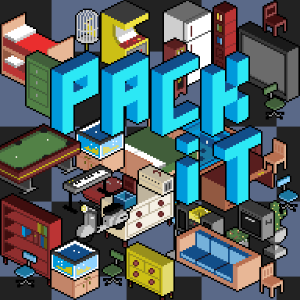 When I started this, I thought it would be an easier game to make since I made an isometric example a month ago. But to my surprise, I ended up redoing the math twice, so I have better understanding on each variable used to create a skewed grid system. I also was wanting to create separate grid systems so I could place items on the wall, but that mathematical task will be tackled later on. 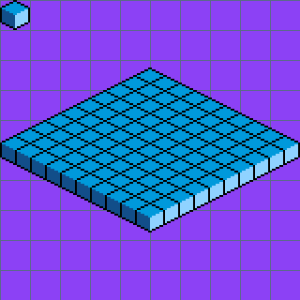 I spent most of the time of this game testing the grid and sorting, and got it to work with 2 lists. But for story, I was actually was wanting to use 2D novel sprites for characters to create an overall narrative. But this game took so much time that I didn’t even create a menu in the end.

For most of the art, @todorrobot actually offered to make sprites for the game. He made them really quick, and they turned out really great! Sadly, close to the end, I found a Huge Issue converting objects into an isometric game. In return for making the art, I helped him with some programming ideas and troubleshooting for his game (yes, I did technically work on 3 games in the Jam). As well thanks to Baconcat for the tittle music.

The huge issue is Display Order!
Because long objects can cover over several grid positions, and I’m also stacking objects, the display order needs to be manage by every skew cell block on all the objects. As you can see, the flat long box is broken up into 2 pieces to keep up with the display order of each cell. I thought I could get away with vertical spaces, but as you can see with the tall box, no cheats can get around this time-consuming issue.

Sprites will need to broken up into individual blocks 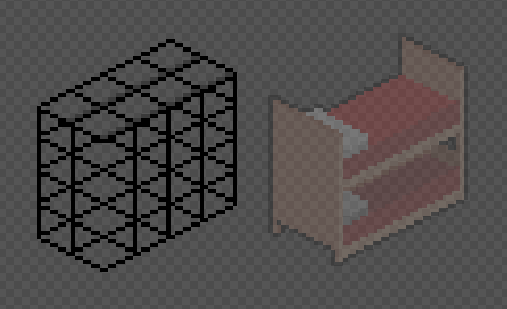 I plan to keep working on the game after the Jam and post updates here, I may create a new topic once the game is finished. I have plans for more features and content for the game. Let me know what you think of the game!

a few games have been mathematical marvels, but I think yours takes the cake for one of the most complex games on this website. It’s immense seeing what you manage to come up with and build, and good luck on the final product!

My one suggestion would be for objects without flat tops (beds and motorcycle for example) to be objects the player cant place extra blocks on. for objects like beds, you could accidentally create floating objects, lol.

Thanks for the detailed write-up! Hopefully we’ll see some followups as the game progresses

I already have that planned,
I have to specifically assign spots in the first list (UI) to what is stackable, so I can assign no attachments or attachments to specific spots on the objects. Like specifically the back of the moped could be a spot to place a 1x1 item.

The hard part would be to actually pick items back up because I haven’t started programming a feature like that yet. There’s a lot of potential for this and will like to continue with it.

This is the same visual bug I mentioned in the post. The tall box specifically has messed up display order.

Quick update, a lot have happened since the Jam has ended, so I haven’t had much time to work on much. But I made a quick update tonight that should fix the layer order happening on one of the box objects.