Hi. Can you still play a game that uses more levels than 7 if you have a free account?

With a free account you can only make 5 levels,

There is a way to bug the system to get more levels, lol.
I gave myself 20+ levels and I only have free.

What you could do is just spam the new level button if you already have less than 5 levels. For some reason it just keeps adding more until you let go or stop spamming the new level button, cause then the indie feature kicks in.
I would recommend not doing this, cause it is kinda breaking the rules.

I just tested it, yep I have 100 levels on a free account game. 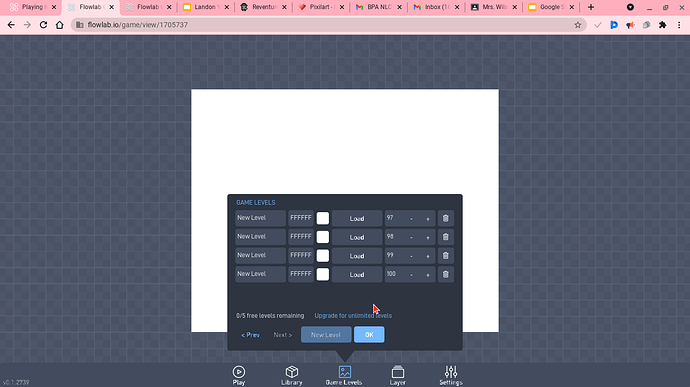 can someone test my game to make sure everything works and give suggestions if something is broken? https://flowlab.io/game/play/1622234

The coins collected do not carry over to the next level. Just an observation, not a criticism - I’m having the same problem with my first game, because I haven’t figured out how to do that yet.

Also, your original help options are not showing up correctly on my screen… though that could be an issue on my end?

This is what I’m seeing when I click on help…

The blank spots are in the same area in every message, so it’s possible something is just broken on my end… can anyone else confirm?

You have them show at the same time.

Also for the coins, just click on object library in a different level, find the object you want, and click clone.

that is how i have to do it with alerts but i could change it but i might make the game laggy but i will try. Also, coins are just to unlock the bars. I dont want them to carry over because they have no other purpose. Thanks for giving feedback!

i think i fixed it. Mind trying it again?

Also, coins are just to unlock the bars. I dont want them to carry over because they have no other purpose. Thanks for giving feedback!

The menus are now displaying properly.

I got stuck on the boss level, unfortunately. I’m sure there’s a trick to sending the rockets up the ramp at just the right angle, but I ran out of rockets before I could figure it out.

the thing is that you have to save a shield so that you can run past and shoot from below.

I had plenty of shields, but I couldn’t get the guy to run all the way up the ramp. I thought I was supposed to use the ramp as a launching path for the rockets. So apparently instead I’m supposed to find a way to get over the ramp.

I’m about as new here as you are, so you’d have to ask one of the expert members how to make things work better (my own projects aren’t very smooth yet either).

when i tried that, i reloaded the page and the level limit reset lol

EDIT / ADDITIONAL: In one of the games I play, they had a quest that gave you awesome rewards for completion. These rewards were only supposed to be redeemable one time, but some savvy players found a glitch to be able to replay it infinite times and get the extremely rare rewards every time. Once the developers discovered the glitch, they searched through the game logs and identified all the users who exploited it, and essentially set all of their accounts to a negative balance - to the tune of about $2 real world money for each time they used the exploit. They gave them 14 days to pay off their negative balances; those who weren’t able to, or refused to pay by the deadline, ended up having their accounts and all of their associated items and progress deleted.

Moral of the story: it’s never a good idea to cheat or steal. You might get away with it? But that’s nothing to brag about. And if and when you do get caught, it will be hard for anyone else to ever trust or respect you again.

Moral of the story: it’s never a good idea to cheat or steal. You might get away with it? But that’s nothing to brag about. And if and when you do get caught, it will be hard for anyone else to ever trust or respect you again.

story of my life

That doesn’t sound like a good thing at all.