Please help, i beg you

Could there be some way to load levels without selecting them, i’m asking since i’m making a rougelike and my only idea for how i could pick a random level is by making a random block with the number of levels i have then having a selector with each output corresponding to a seperate level, and then having to manually select the level for each and every level behavior, so i’d like to know if there’s some way to go to a specific level without needing to pick it manually?

Well, one way to create a system that randomly picks levels is to have a random number behavior, and then use filters to determine which level the game should send the player. Sort of like and If-Then situation: if the random number is equal to 4, then go to level 4. I did this in one of my games, Stealthy Ninja (which may be incredibly outdated right now, but it still works). Just check either the player object, called “Ninja,” or the Exit object. Both of them contain the system I’m talking about.

You have to choose the levels and triggers yourself.

Oh yeah, I completely forgot about the Router. Although that is limited to 8 outputs, so you may need several Routers and Random Number behaviors if you have more than 8 levels in mind.

But I’ve done way more than 8 outputs before… 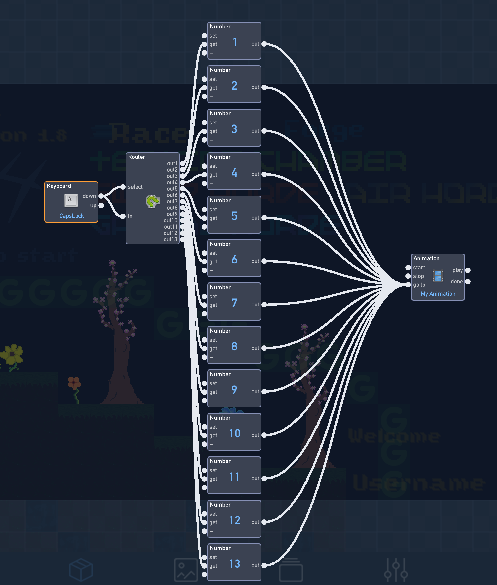 How? Whenever I try it resets to 8.

EDIT: Actually, I just tried it out. Turns out you can put in more than 8. Maybe there was an update that increased the threshold? Or I just encountered a bug. Not too sure…

Perhaps it is the latter

I think it was 16 before and grazer updated it to be 32. Also @John_Shrekinson in that case where you are using a router to pick numbers between 1-13 it’s unneeded. You can instead have a Number increase by 1, then have a filter set it back to 1 when it exceeds 13. So 2 Number behaviors and 1 Filter (The Keyboard behavior would go into the “+” input).

For the Random going into the behavior, it’s unneeded because the Router has an option that ‘Randomize next Route’.

So @puginarug what John_Shrekinson said is correct excluding the Random behavior 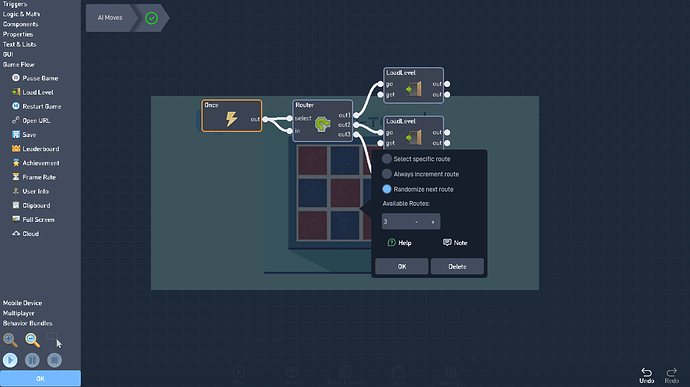 Did you even read the post, i did the exact thing you’re talking about except instead of a ludicrous amount of filters i have one router

Yes, I did. My suggestion was that you use Filters to randomly select a level (though the Router is more reliable, as CodeAlpaca and John Shrekinson demonstrated). Your post did not mention Filters or Routers whatsoever, just the Random Number and a “selector,” whatever that may be. So if you were referring to Filter or Router behaviors when you said “selector,” then I did not understand the correlation.