so right now the game is missing two animatronics: hamilton and Roxy. should I release it without them and add them later? or should I add them then add some extra stuff?

I feel like it would be more important if you waited until the animations are done so the game would feel more finished upon arrival. Plus this just gives you a reason to get it done and over with so you don’t have to worry about it in the future.

Well, Porky’s Nightmare (the original) has been out for quite some time, yet Porky’s behavior wasn’t added until months after the game went public on Flowlab, then it took almost a year to revamp his behavior after the game crashed and had to be reset. The again, what you said is a smart move and would probably be the best option, but there are so many incomplete games on Flowlab that I don’t think it will be an issue to make the game public… on Flowlab FIRST, then Itch when it is fully finished (I think glitch said somewhere that an Itch release might be possible).

correct, also @ManiacPumpkin the only real animations are the jumpscares other than that all the others are done either in code or have very simple animations. when hamilton and Roxy are fully added the only animations added to the list are the jumpscare and them hiding in the bathroom waiting till the time is right
anyway it seems like later won so ima close the poll

Keep that in mind

well update: there ai might be finished today, jumpscares tomorrow

He is. I gave him permission to do so, and not gonna lie, it’s looking really neat right now. Although in his version, it’s more like a Custom Night game, while mine is a Story Mode.

you could release a demo.

which makes it really fun.

what did he say

I deleted the reply because I thought it would be better if the text was in the same reply as the previous one. Just to prevent spam and stuff like that.

here some magic that goes behind the code. basically, the ai works like this: the animatronic takes its ai level and performs anonomous number depending on the animatronic subtracted by ai level and makes the outcome the max. if it has no ai level it simply does nothing. if it does however it then starts a repeating timer, inputting into the new input of the random behavior. if it generates 2 or 4 its counted as a go for it and it moves to the next room, the room they go in varies on the animatronic 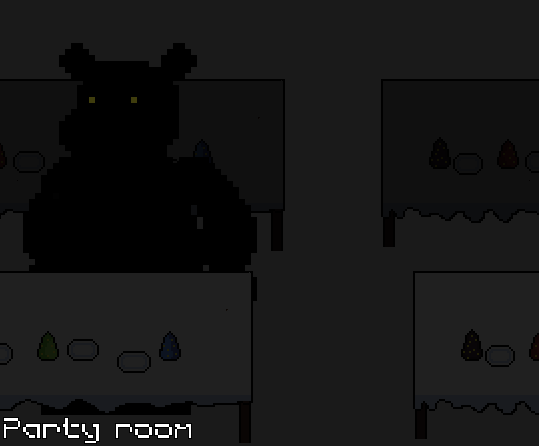 can you link the game

its not finished yet, it just simply a teaser
people on the flowlab discord did get to test out the older version before the visual upgrade

to everyone that voted now: the game definitely aint coming out today, mainly because of the visual update and the poll to make it more playable with more content 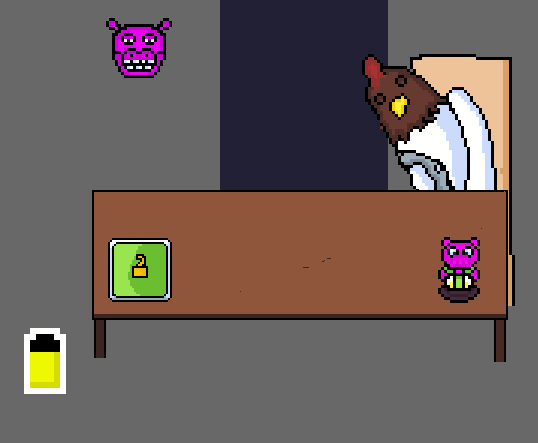 it looks a little empty though, how about some posters? and checkerboard floors?