I have 15 requests and 7 completed

A full review tomorrow. Take your time and enjoy both your life and and the game!

Well, I should be able to get it done today! That last comment was from pretty late yesterday, so I didn’t fully expect you to see it but figured I might as well ask.

Here @Ramshackle something to know about the story, controls and everything else (will be included in full game) 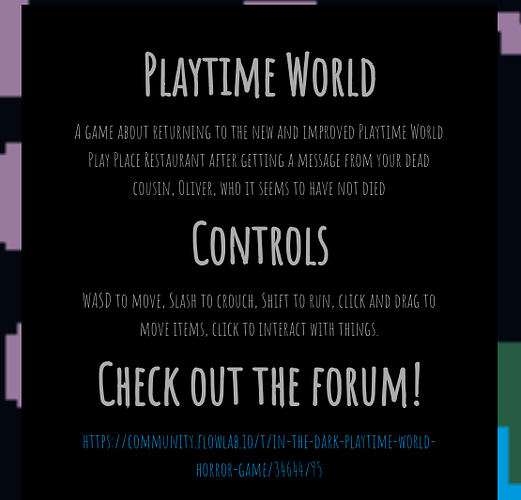 Sorry if you can’t read it

Story 1.7/5: there is obviously a story present, but no definitive way to experience it in all its glory just yet

The rocket looks like an Iron Man suit! Well done!

Art 2.5/10: although I can see some detail went into the characters there isn’t much here. The player sprite is plastered over the default flowlab character. No animations, the enemies are so thin with different pixel sizes that it’s hard to make out

How well the game fits said style 2/10: I can’t really tell the “style” of the game here, it just feels like madness thrown all over the screen. Not much else I can really say here, maybe spread apart the enemies a little bit to give the game a better feel without just throwing you into the action

Gameplay 2.3/10: it’s there. You can run jump and use a couple weapons, but the controls are almost impossible to figure out without reading the description which is another point I’d like to bring up. It’s okay to put a few things in the description of the game to explain something or point something out, but it is soooooo overused in this case. You put everything in the description. You can kinda see what the basic controls are at the beginning but since the enemies are already right up in your face when you start the game you’re already dead by the time you read it. After I died I couldn’t even tell which button I was supposed to press to restart so I ended up double tapping esc. Apart from that the controls once you do figure them out are pretty janky. You can sprint, but probably shouldn’t or risk getting flung across the map. You can use a battle rifle which is basically a cheat code and removes all sense of challenge. unless you decide to use the scope which zooms out and makes it even harder to tell whats happening. I’m sorry for being harsh, but these are serious criticisms that you’re going to have to keep in mind if you want to improve as a game developer. 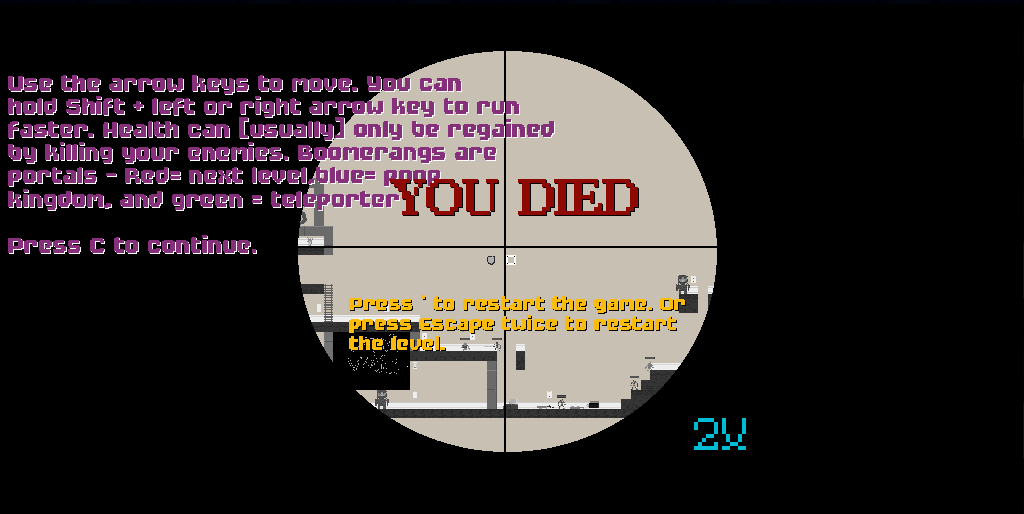 Enjoyment 2/10: I had some fun with the game, and I’m not going to pretend that I didn’t. But a lot of the issues I pointed out in the gameplay section is why I couldn’t really maintain that enjoyment. It just feels random. So much stuff scattered around the map for little to no reason, and it really makes the game feel cluttered.

Difficulty 1.2/10: semi difficult if you don’t use the rifle, but once you equip that thing there’s nothing the enemies can do. I can’t say it felt bad mowing down hoards of enemies with no effort, but from a gameplay standpoint this really needs to be addressed.

Story 5/10: I gave this a 5 because it did make me chuckle a few times, and It was pretty enjoyable just to read the ridiculous plot. It really does feel like something a kid would come up with when playing with his or her toys

Music 3/10: it’s alright, pretty repetitive. Most of the soundtrack is just the same note repeating in a simple beat

Title 1.5/10: Not much I can say here, haha funny weed joke i guess. But not much to do with the game, especially since it’s based off of you and your sister’s toys. I don’t think marijuana is something someone would play with. Especially when paired with halo action figures

Originality 1.75/10: it’s pretty much just a basic platformer with guns. The only thing that really sets it apart is the story. But overall it’s using all licensed products. Nothing I’ve seen in the game was thought up by you.

Game feel 1/10: this is really the worst the game gets, as I’ve said before all the objects feel randomly placed. There’s no challenge, and most of the controls feel way out of wack. Fix these and the games overall score will go way up

Creativity 3/10: There were some cool ideas in here. The title screen is very charming and honestly my favorite part of the game. You took some liberty making the story, but other than that it just feels pretty generic.

Overall 1.29/10: Although this game has a lot of things I like about it these reviews were made to be harsh, to push you to keep going and become a better game developer. Not just for you, but for everyone. You have talent, but you just need some work focusing that talent towards one thing until it’s completely done. This can be something amazing, but it just needs some work. Good job, and good luck!

Reward: The ramshackle badge of approval 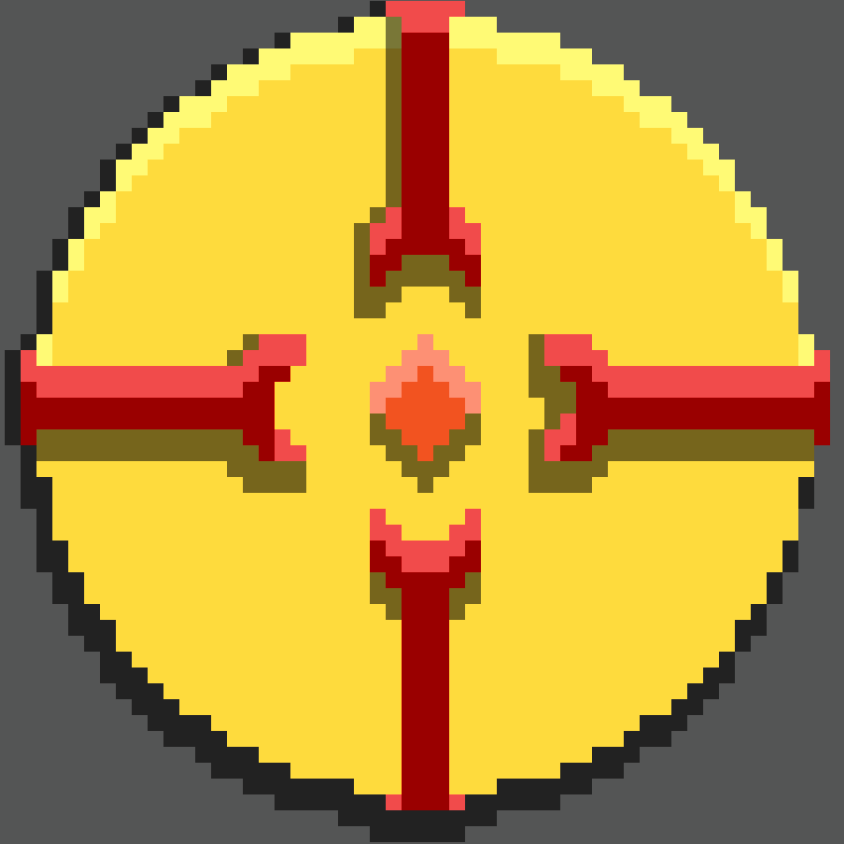 (credit to huckleberry for the sprite)

You can also feel free to ask me if you need some general advice, or have any other questions.

how many levels did you play; i beat the whole game and unlocked all endings.

Hey, I just finished this sidescroller game, I would love any feedback, Warning It can get very frustrating (I based it loosely off the game getting over it).

I beat it in about 700 of my weird time tracker time.

Hey @todorrobot and everyone after him, sorry that I’ve kept you guys waiting. Something came up, but I should be able to get todo’s review out sometime tomorrow.

Here @Ramshackle something to know about the story, controls and everything else (will be included in full game)

This is a very late response but I’d like to point out that these are reviews of games, and I will not be considering the description as a part of your grade. I’m grading these as if you had published them, and I had no way of seeing the description while I’m playing the game. So the story grade was based on what I saw in the game.

I know you have some games logged up, and don’t feel stressed about completing them all, but if you would like to review it, feel free to review my game when you have the chance 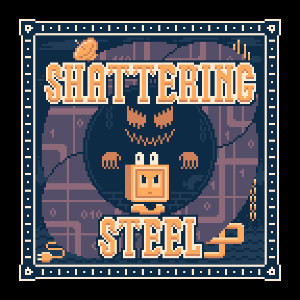 @todorrobot “pick up the empties”

Off topic: How do you pronounce your name by the way? My mind used to play tricks on me and I’d switch up the letters making me say tor-o-dor-o-bot which is obviously very wrong. Do you say it tod-er-o-bot? Toad-or-o-bot? Or is there some other way you say it?

Art 7/10: Slick animations, and some pretty detailed sprites. This game has some great art, and honestly I don’t have much to complain about! The only reason I don’t rate it higher is because it’s nothing game changing, the sprites are pretty basic (which isn’t a bad thing in this case). You did stick with the same style through all the sprites which shows that you knew exactly what you were doing, and did it pretty dang well

How well the game fits said style 8/10: The game pretty much speaks for itself. The sprites do fit the gameplay quite nicely, and I do like the fun (borderline cute) pixel art.

Gameplay 3.5/10: the weakest part of the game itself by far. It’s fun to a fault, and drags out a little bit after a few tries. Not very much of a challenge unless you get stuck on a gnome which wasn’t intended, but the charm of the game makes up for this department pretty well. 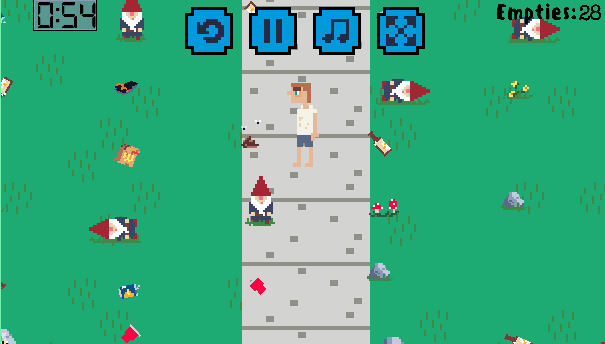 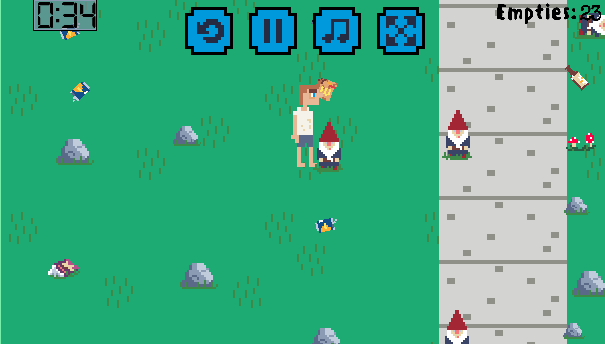 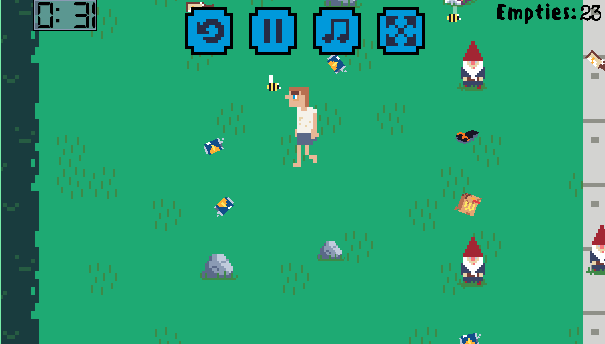 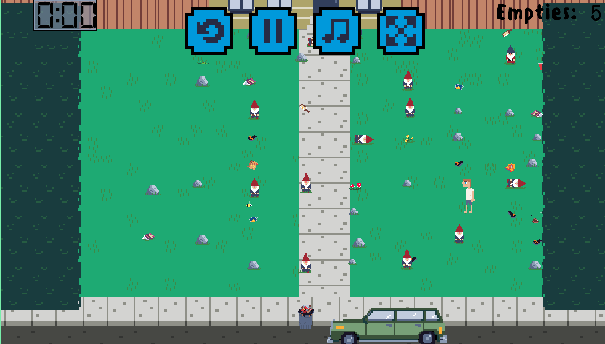 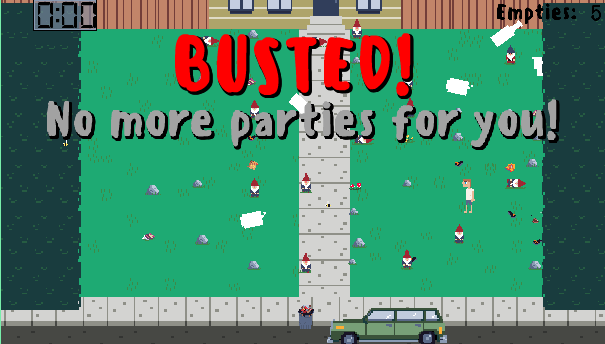 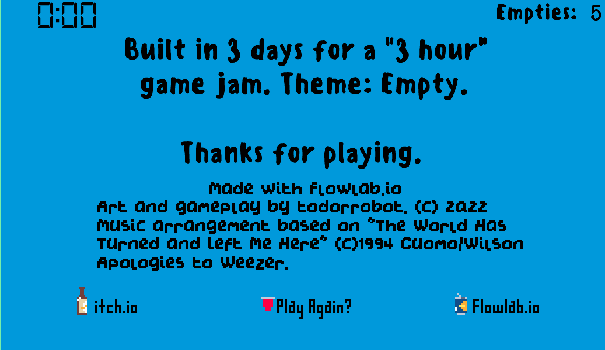 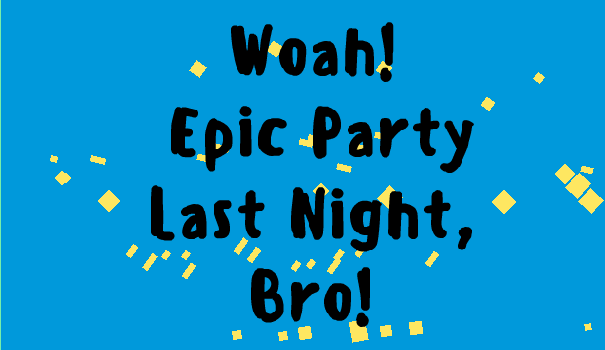 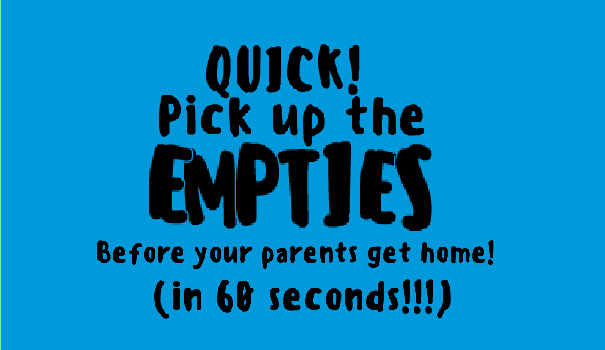 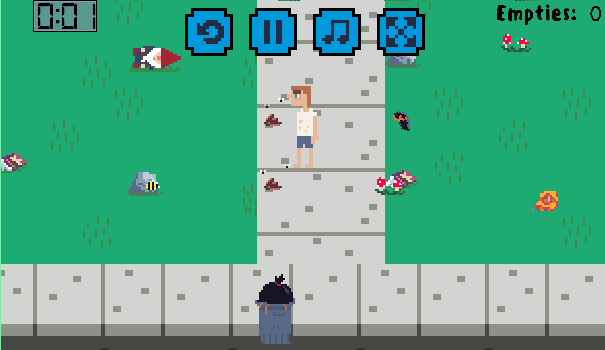 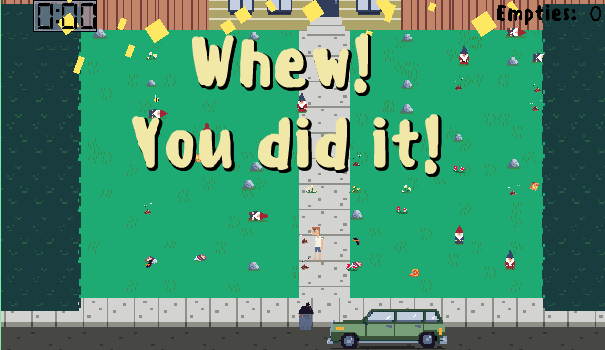 Enjoyment 8.2/10: I found myself with a smile almost the entire time I played this game, the confetti, the fun sprites, the UI, and the dialog (I’m not sure if that’s the right word for it) all brought the game together nicely even if it’s lacking a little bit in the gameplay department.

Difficulty 2-2.5/10: Depending on where the empties spawn in it can get a tiny bit harder, but the game never presents a real challenge. After everything I can understand why, this is a fun game and really doesn’t need that real “challenge” to it. The timer gives you a sense of urgency, but if you take your time and think out what you’re going to do you should be totally fine and start to win every game.

Story 1/10: Since there is a bit of a story here I thought I’d give it a grade. Basically you threw an awesome party last night and now your parents will be home in a minute, but you have to clean up the yard so you don’t get grounded (or banned from throwing parties)

Sound design 7/10: the themes and sounds fit very well here! They aren’t annoying in any way, and I found myself tuning up the volume during gameplay. Honestly great job, but I will say that I did mute the tab and listen to my own music after a while

Title 8/10: Basic, to the point, and tells you exactly what the game is in a short sentence. It’s not the absolute best name I’ve ever heard which is why I didn’t give it a 10, but you nailed the premise of what a title is supposed to symbolize.

Game feel 9/10: this one got me, I don’t know what it is but it feels right in my hands. I felt both refreshed, and happy playing this game.

Creativity 6.5/10: As I mentioned earlier this is a pretty new premise that I don’t see too often, and you did a pretty good job expanding on that. Honestly there just isn’t enough game for me to grade it any higher, but you were very creative with it and I enjoyed the idea a ton!

Overall 6.52/10: I had a lot of fun with this! One of the more fun games I’ve played here on flowlab. It’s not perfect by any means, but I would highly recommend to anyone looking for a fun little game to pass the time!

Reward: The ramshackle badge of approval

(credit to huckleberry for the sprite)

How do you pronounce your name by the way?

I always do the same with his name! My head always prouncounces it weirdly. I think it’s pronounced tod-or-robot

I don’t even read his name, I just hear it as turbo-bot for absolutely no reason.

yes, correct. tod-or-robot. it’s not quite a palindrome and not quite a reflection, but i liked the symmetry. Also “todbot” was already taken on a bunch of social media platforms, so I became Tod OR Robot. 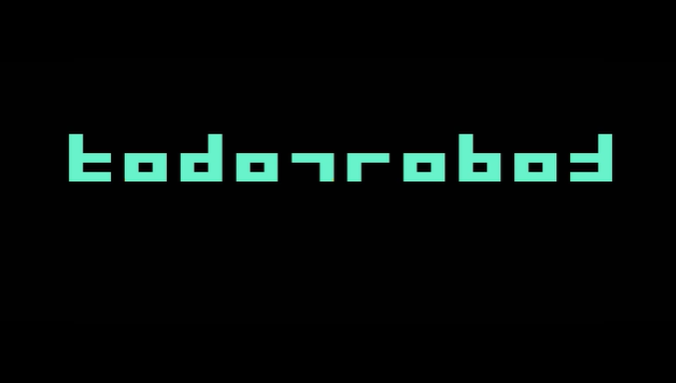 Also, Thanks @Ramshackle I appreciate the play through and the kind words. I never really meant to spend more than a few days on this game, but it was so charming that I didn’t want to stop. I’m glad you had fun and it made you smile. Did you read the post-mortem I posted on itch? 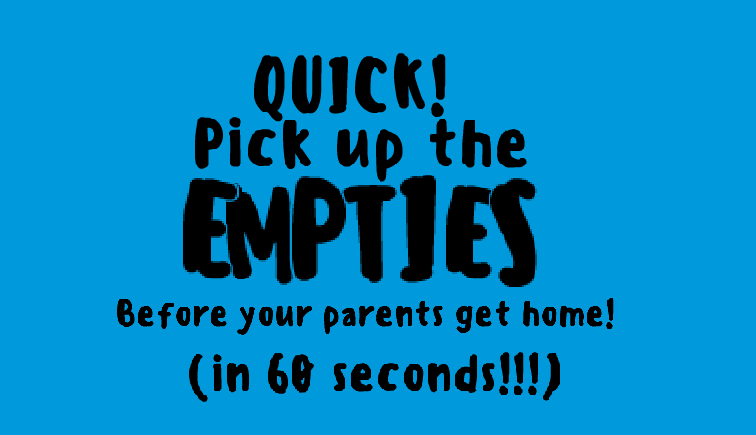 Double Jam Disaster - Pick Up the Empties by todorrobot

Is disaster too hard a word? Probably. Did I stretch myself too thin? Definitely. I'd just finished participating in a double jam attempt and felt ok about my submission. It was enough to get a proof...

I didn’t, but I’ll definitely read that!