This has definitely been one of my busiest days as far as writing goes in quite some time! haha

There are 5 games currently in development at ViperTeck Entertainment Studios.

jeez man, that’s a lot of games. make sure you aren’t burning yourself out!

haha tryin’ my best not to! Definitely want to get some of them to a more complete state in the following months, though. Last real product I put out was in 2020 with HAKK3R 1, and we all know how that went /:

Sadly, due to a lack of participance, short notice, and lack of communication, FlowCon 2020 is CANCELLED. FlowCon 2021 is planned to premiere in March, 2021.

I’m not entirely sure what flowcon is, but it sounds cool.

haha that was a long time ago, August I think. FlowCon was designed to be an E3 of sorts for Flowlab, but it had to be cancelled because not enough people were joining in.

Note on that: I’ve been at the drawing board for quite some time, and have been toying around with the idea of pushing FlowCon back to 2022, but there’d need to be some big growth in the community for that to even remotely happen.

Could you give me some sort of description of what its mainly about. I’m interested in the idea and I could possibly join it. But I’m not entirely sure why it would need a huge amount of users.

Have you heard of E3 before; the game event?

No, I don’t think so. Other than you mentioning it, lol.

Well, nevertheless - FlowCon is an Expo that would be held by your’s truly and @The_Kodex every other year. (Reason it’s us two, is because we founded it together.) The biggest developers on Flowlab come to FC (FlowCon) and get a certain amount of time to talk about their new game and preferably, release a special trailer along with it. This event in its concept stages also had a recap on the last two years of Flowlab, alongside having Grazer talk about future plans for Flowlab and where it was headed next. Big announcements, big names, and ultimately, bringing a new light of professionalism to the community that couldn’t have been achieved otherwise.
Alongside that - it’d one-up most other Indie Dev Platforms in the sense that we would have our own event.

An ambitious project that got loads of people excited. But not quite enough at the time

That sounds like a pretty cool idea. I would love to join. That kinda sucks you don’t have a lot of people to participate in something like that.

Yeah! We thought so, too. I think it also may be a matter of the Flowlab community not being quite big enough yet. However, looking at general activity comparative to how it’s been for the last few years, I think the time may be coming. FC is certainly not a trashed project, because we know it’s got potential. We just need numbers and for it to get published by Grazer.

I suggest ensuring you get the big names of Flowlab such as Pixelpizza, JR 01, Latif, etc. If you can get them to talk about/show-off their projects that would mean that the interest for higher quailty games would be higher and more people would likely show up. Add on top of that Grazer talking about Flowlab or something and other smaller devs and you could certainly create an interesting event. You would also need a lot of promotion somehow. This seems like a cool idea, but it will need a lot of work to get it going well.

Agreed, 100%. There’s a lot of members I’d get on ideally, but a realistic stand-point is important, as well. If we can start small but get a good show going, then I imagine more popular members might become interested, start bigger projects that are eligible for FC, and grow the ‘Dollar-Store AAA’ Industry in Flowlab, as I call it. hahaha

Allthewhile bringing more attention to Flowlab, driving game dev traffic, and building a web of members that expands even farther. The positive effects that FC could have are much larger than what immediately comes to mind, if all goes right.

What does this mean for ViperTeck Entertainment Studios?

Well, it means that we now have a roadmap of what our next few years of development will look like for you here today. 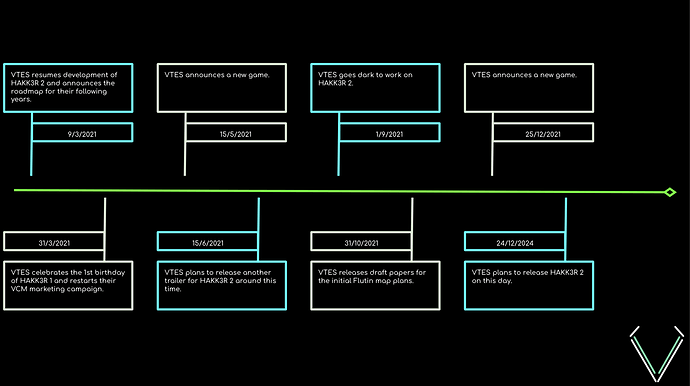 Dang, 2024 is a long time! But that will mean that you have more time to polish and work on the game. Good luck, and regardless of its release date, I am looking forward to what you are working on for HAKK3R 2.

Likewise how I’m looking forward to giving something to the community! Hope you enjoy the things we’ll be presenting to Flowlab in the following years!