Hi! I’m Todorrobots son, and I’ve made a bit of what I think to be a pretty cool game! I currently have 17 levels in it and I want to see what you guys think! (Read desc for controls) 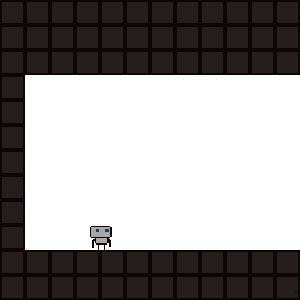 Thank you! I have been having trouble making a difficulty curve, but I guess ill get to that in later levels

Very Epic game, though i did notice that if you put the cursor above him he dances, thats not a bad thing though

hehe yea, I noticed that. At one point if you pressed right-click he would stop but I like the pace of the . game always moving. (:

its the robo dance, if you make this a full game advertise that as a feature

My feedback would be that I would change the player’s hitbox from circle to Polygon, so it doesn’t stick to walls, even though you use that as a mechanic later on.

Changing the cursor to white in the darker levels would help a lot.

HAHA , love it. The robot is so cool, you made it?

yes, I made the robot. I definitly will have the dance bit be somthing at least, some sort of puzzle, thank you for the feedback. soon, I will have my own account so check me out there, (will link it when I have it)

oh, never mind
im on my other account lol