hey, guys my computer detected this weird signal, i managed to convert it to a message
and it said this:

This is captain-(Hello? Can anyone hear this?)-Im sending out this signal in hope that somewhere
will pick up this frequency and someone will read this message. Ive crash landed on a unknown
planet and is somewhere within this planets cave system- (ANYONE? SOMEONE? PLE-
[signal lost]

every important person in this community

you can think of

they always @ just those people since they helped them once

I’m not for sure what to exactly think. It sounds like the basic plot of some space recovery mission, but I’m sure you probably have more details for it since it’s just a teaser for an idea.

Also I wouldn’t recommend tagging people that you know off the top of your head. Unless you need serious help or need someone’s advice then tag them. By tagging half the community for something isn’t the correct approach.

I would just post something and eventually someone will check it out and leave feedback. The forums are incredibly small and you might not even get many views or comments at all on your posts. I’ve had issues like that in the past, but you can’t do much about it. The few active users on here are usually busy on their own games or life in general to check every topic on flowlab.
If the community was much larger, you wouldn’t need the attention of the few already on here, but like I said you can’t really do much about it unless you advertise on other media platforms that’s more active.

Like i said, I would recommend not tagging users for something as little as a teaser for a game idea. Not many people are alright with it, and probably use their notifications for helping those who need it.

Damn even I wouldn’t be this rude

The situation has happened many times before so Galactian wasn’t really being rude, but more forceful. It’s common curtesy to not tag a ton of people when something in the slightest happens.

i think this is worse than when he called everyone mr. sir every three seconds

Never once did I say it was a waste of time. But you be you man. I’m not gonna argue here.

All I was saying was during your hiatus this user has tagged many people on posts before without a good reason and Galactian was getting tired of it.

what do you guys think?

Plus he also asked for feedback so that’s what I gave.

Why in the world would I be talking about what you said? I replied to Galactians message didn’t I??? 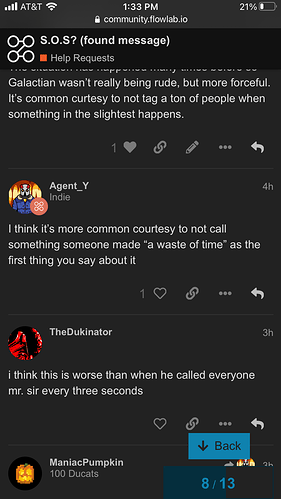 Not sure what it shows for you, but it doesn’t say you replied to him directly so I thought you were speaking to me. So I do apologize for the misunderstanding.

Also that’s not even a novel long entry. I’ve written much, much more before.

just as an FYI instead of doing (20 characters) do [ooooooooooooo] but with the [] as <>. the text vanishes.

Meh I guess this is okay I mean why do you sent this message anyways?

Because he is making an ARG.