Should there be a Compass in Monster Maze? (POLL ENDED)

This is a question I have been asking myself for a long time.

If you’ve seen this thread, you’ll know by now that I am working on a survival horror multiplayer game called Monster Maze, and so far everything is going according to plan. But there is a question that has been bothering me for quite some time: Should there be a compass in Monster Maze?

When I had Monster Maze planned out, I came up with the idea of powerups that spawn throughout the maze. I have came up with several, from a stunner that stuns the monsters to a magnet that pulls in emeralds (I’m not sure if it’s realistically possible, but emeralds do have some iron in them, which is highly magnetic, so I won’t be surprised if it is).
One of these powerups that I’ve come up with is a compass that points to the direction of the nearest monster (since there is going to be several). Since vision in Monster Maze is so terrible, this item would be EXTREMELY helpful. But then during gameplay, I realized something: it would be a death sentence if you happened to be running straight towards the monster as it’s running towards you. Think about it this way:

I thought that it would be helpful if players had a permanent compass to at least warn them if a monster is headed their direction. But at the same time I don’t want the game to be too easy. Having a permanent compass to reveal the direction of the monster’s location is like being able to see through walls in real life to see a giant monster running around your house; you’ll know where it is and you’ll get to avoid it. This will make the game a little less suspenseful because then you’ll know what to expect.

So what do you think? Should we have a permanent compass that makes the game slightly easier, or should the compass be a temporary powerup to keep the game the way it was designed for?

I can’t really vote cause I had an idea of maybe making different modes. Like easy would have the permanent compass, normal would have power up, and hard would not have one at all. Although if I had to say, I would probably have to go for power up compass since it would lay in the middle category according to my idea. I’m not sure how you could add a difficulty choice in you multiplayer game, unless there was a vote at the beginning of each round.

Interesting idea.
I never considered difficulties, only new maps. I could have players vote for which map they want to play, and vote on the difficulty too. Although in the case of difficulty, having easy mode turning the gameplay easier, that will still destroy the horror aspect of the game. Depending on how the vote goes by Tuesday, I’ll have made my choice for the compass mechanics.

Also, I forgot to mention this: during gameplay, the player will hear ticking sounds that grow louder/faster the closer the monster is to them. It’s sort of like the compass mentioned above, but this time you still have no idea where the monster is. It’s like hearing a ticking time bomb hidden in your room and having no idea where to find it.

Hmm, maybe for easy mode, there are a few ways of keeping the horror aspect with it. You could have the monster have a sabotage button similar to that of Among Us and he is able to interfere with the compass so everyone would be unsafe for a certain duration. At least that’s about the only thing I can Pretty much think of for something like that. If not, then I would probably stick with the power up compass.

For your second paragraph, the monster could have a silent feature, which could make him go slower to the players speed (if monster runs faster) but he is also silent and the players can’t hear the ticking when he’s near. Although it might be a little overpowered so you could add the ticking still, but make the radius or distance shorter when he is silent. Although these are just a few ideas that I could think of and your game is probably much better without it. Just a few concepts.

Yeah, no sabotage button. The monster is a pure AI entity. As for the ticking part, I might make another powerup (or debuff) that temporarily makes all players “deaf”, blocking their ability to hear the ticking sounds when the monster is nearby.

Oh, I though that a player was selected at random to be the monster, sorry lol.

Nah, maybe in the future that will be the case, but for now, the monster is a pure AI entity.

Well, the results are in, and it looks like the compass will end up being a powerup item that players will collect in order to reveal the closest monster.
I also decided not to include difficulty settings, but instead different gamemodes (these won’t appear during launch yet). The first would be Survival, which is the main gamemode of the game: as a team, gather 450 emeralds and survive 15 rounds. The second would be Hunted, which is where one of the players gets to be the monster. Finally, the third would be Boss Mayhem, where you will be hunted down by bosses only.
As a thank you to everyone who participated, here is the animation sprites for the main monster that you will encounter: the Silencer. 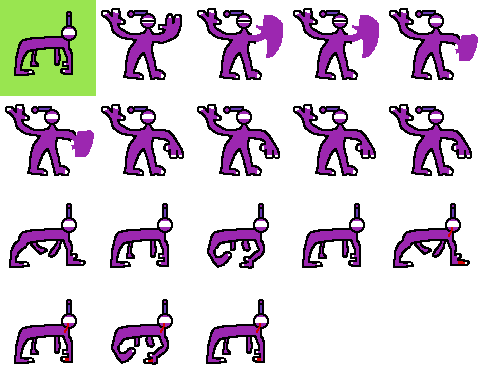 Yes, the game will contain mild blood and fantasy violence, that’s why the last few frames have that red bits on it.