Team Super Blocky Racing 2 reworks the team mechanics from the original Team Super Blocky Racing. You now race in a 4v4 with and against human-like AI. There are 4 classes of racers. Speed, Support, Offense, and Defense. Each player will also have a unique ultimates that benefit either that one specific racer or the entire team. Each racer also has cool quotes they say when they use their ult as well. Each racer will also have unique attributes to help them individually or their entire team. First team with the most laps until the timer ends wins the game!

So there are 16 playable racers. one example of how ultimates work is a racer called Comet.

Comet Ultimate:
Cosmic Deformation.
When she uses her ult, she will say: “What twinkles in the night!” and your vision will become distored and illuminated with stars for a certain amount of time.

I will maybe need some testers so see which racers might need a nerf or a buff.

Basic details of how a team wins if this seems confusing:

The laps that each player completes are totaled together for everyone on the team and whatever team with the most laps completed will win the game.

I might change this later but it makes it stand out more than any racing game. Sorry if this is confusing but I will explain if anyone has questions.

Okay, so, I reworked the Ultimate Mechanic. There will be diverse ultimates to choose from instead of it being based on the character. This will now affect an entire team instead of individually. So an ultimate can give your team and advantage, or it can give the enemy team a disadvantage. A series of rewards that can be earned by leveling up the Expedition Pass. I’m thinking about adding team skins, or maybe limited time packs you can unlock at certain times. For example: Crimson Hearts Pack: 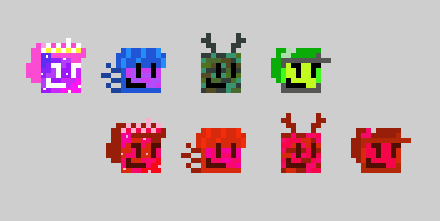 I’m excited to see how this improves on the foundation of the first! Best of luck on the development!

Thank you! I hope so too!

Within each race, the director will take score of the various actions each player on your team perform to determine the MVP. The MVP will give a special quote if the team wins. Here are the various quotes:

Blaze: Guess you couldn’t take the heat!
Zero: Quit living in the past. The future is now.
Cloud: Patience is key to victory…
Starlight: We earned this together! As a team!
Bubbles: I couldn’t have done it without you guys!
Flora: I can’t wait to tell my flowers about this!!! Wait- did I say that out loud?..
Carina: I don’t see what all the fuss is about.
Rose: Ha! Was that the best you could do?!
Smoke: Master. I hope I made you proud.
Comet: We are unstoppable!
Blizzara: They don’t say i’m cold hearted for nothin. Ice kinda is my forte.
Inferno: The flame that burns within us, will never rest.
Camo: The wild has no limits.
Jelli: Does it sting? Good.
Reala: Don’t push your luck.
Void: That was almost too easy!

I’m thinking of maybe adding special dialogue at the start/end of each race, kind of like dragon ball fighterz, not sure yet.

Note: Carina and Rose are new racers added to the Team Super Blocky Racing roster. They sisters who are interdimensional princesses from another universe. Their primary goal is to find the final sister, Io, to restore the power that once lied within them.

I’m not sure if I will implement a story into this game, I just might do that and rework alot of things.

Each character will have their own titles. Here they are:

I’m also changing the backstory of Carina and Rose. They are spirits of the skies called the Rogues. After their sister, Io went missing, they made it their primary goal to find her, and restore order to their world in the clouds.

Character profiles should be updated soon.

The powerful… the cold-hearted. Born from the freezing point in the coldest place no one could dare to seek. She fought her way through the ranks to become the most respected pixelon to be. Don’t think you’ll enjoy the luxury of a warmth too long, for winter’s brink is yet to come.

The tracks so far are:

Thinking about making Special tracks that change each lap.