A halloween game! Skeletons try to kill you, so shoot at them. Try to survive as long as possible and beat your highscore! 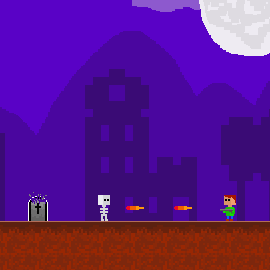 Thanks! I actually want more game play ideas, but I can’t imagine more than graves and flying boxes.

Spoopy ghosts, zombies, stuff like that. Ghosts won’t die from shots but disappear after a bit, zombies have a chance to get back up after dying.

btw this game remembered me “Slayin”
I love that game

Now there’s a small chance a skeleton with a gun comes out of a grave. It shoots only once, then acts like a normal skeleton (but it walks slower).

The ghost idea is pretty cool. Zombies would be a bit annoying I think.

I was also thinking about a skeleton with a bomb and it explodes when you kill the skeleton. Or it could just drop the bomb near you and run away.

For the zombies, when it hits 0, filter to have it play a dead animation, and random 0-1. If it randoms 0, filter destroy, if it filters 1, animation get back up, set health 50%.

All enemies die by one shot

Well that takes away the challenge doesn’t it? The cool thing about skeletons is that you could have a chance meter for a broken leg, so if the leg breaks, it loses speed and has to jump on one leg, or both legs break and has to crawl, or shoot off the head and it walks back and forth aimlessly. There’s so much you can do with it.

Added the bomb skeleton! Also increased the chance a gun/bomb skeleton comes out of a grave and decreased max speed of grave spawning.

The bomb skeleton runs really fast and tries to drop a bomb near you. Then runs away and the bomb explodes. When you shoot him before he’s near you he drops his bomb immediately and dies.

I’m not sure about giving skeletons health. I think the game play like this is already good.

I think the gameplay like this is already good too…

Sure. The giant skeleton usually uses punches to kill the player and drops a huge bomb when he dies that instantly wipes out a majority of his life.

Oh yes let’s copy everything from clash royale, let’s be original! Balloons which drop bombs from the sky, a giant skeletons which drops a huge bomb when he dies, guard skeletons with a shield so they have 2 lives, a witch which summons skeletons, a skeleton which throws with bombs.

Wait a second… These are AMAZING ideas!

And a barrel that drops skeletons from the sky!

By the way, I’ve added the guard skeleton!

Guard skeletons have a shield which have 3 hitpoints. When the shield breaks you have to kill the skeleton which has 1 hitpoint.

Btw I think if you are really working on this game you could changue the theme so the game wouldn’t be just an Halloween game. or you could just keep it it’s cool anyway

Well I made it in halloween so why not