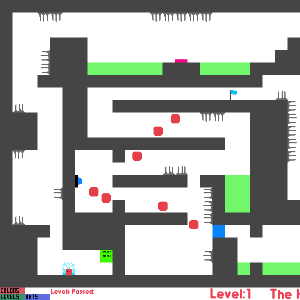 Controls: - Use the arrow keys to move. - Cling to walls by holding the left or right key. - You can travel along ceilings by spamming the up key. - You have air-jump capabilities. If you drop off a cliff or a gray wall without jumping, you are...

I made this game a while back and recently added a ton of new features, fixed lots of bugs, and added a second full level. Feedback would be appreciated!

@johnpost, that is a game NOT WORTH PLAYING! I tried to beat that thing, but it is practically IMPOSSIBLE to beat! I think you should redo the game of yours cause it is not interesting. If you do, please notify ME!

The point of the game is that it’s very hard. I think I accomplished that, but it’s certainly not “impossible.” Admittedly, I’ve spent a lot of time playing it during development, but I can consistently pass level one. There is also a level select so that if you become bored or stuck on one level, you can try out other ones.

How much time did you spend trying out the game? Did you read the documentation, especially the controls? The controls sections gives important info on how to move in the game. @Tim01

I am also planning on adding a tutorial/practice level to help people get the feel of the game and learn strategies to pass certain obstacles.

@johnpost I played your game and I quite think its very enjoyable. You really did master the fact that it’s impossible, lol. Did you get inspired by a game on coolmath called The Impossible Game. Its actually very similar but its a topdown version of your game. Also I really like the fact that you can climb up walls and on the ceiling to get past obstacles (Not sure how you did it). The Level select is so cool, not entirely sure why you would eventually need 99 levels, lol, but it functions correctly, well done.

I would definitely recommend others to attempt the game. I, myself, haven’t been able to beet it, but I can see this game being something really good later one.

@ManiacPumpkin Thank you! That actually means a lot.

I do take pride in my level design being very tough. I was partially inspired by the game you mentioned, I’ve played it before myself. My game definitely fits into that niche of difficult but rewarding if you win.

The level select is actually a feature I implemented recently, it took a while to code, lol. I knew my old system of just pressing a number key would be limiting if I wanted to ever make more than 9 levels. 99 levels is certainly a little overkill (haha) but I wanted the system to be robust.

If I may ask, how far did you get? Did you ever reach a checkpoint? Check out level two?

I love this game, the graphics are cool and man is it hard lol

Awesome! Did you try out both levels?

Dang, even for a platformer veteran this is hard…

No, I did not play that long but I’ll tell you when I do.

Epic, remember you can use the level select at any time

@johnpost yeah I tried both levels, but I only really played the first level. I still can’t get past the part where you have to cling to the ceiling and drop down on a platform with out hitting the bumper. In other words the very top. I do say it’s very difficult and still couldn’t beat it, but sometimes difficult games can be fun cause It can give people goals or motives after each death, lol.

It can be a little tricky, but here is a slow-mo gif of me running that section. The trick is to drop down from the ceiling, then use your air jump to slow your fall and tap right to land in the proper place.

Okay, thank you. I prob should have said that I had a hard time just geting to that point. I only made it there once and didnt quite know you had to clingto the ceiling lol.

But i figured out the climbing on ceiling on the second level so, yeah. Its still a very good game, keep up the good work and I cant wait to see the finished result.

Thanks for all the feedback. I want to make a youtube tutorial series where I go through each level and explain exactly how to pass each section, but I don’t really have time for that lol.

How do you post the little snippets of video?

How do you even TAKE a video?

sorry for going off topic, but I think the game is really cool so far! It’s hard, but defiantly not impossible

No problem lol. Thanks! Any suggestions about anything? I’m working on a title screen now.

Not that I can think of, but I’ll let you know if I think of anything