The light's in the dark

as some may know ive been experimenting with different side projects and I finally found something that could work, ambitous? yes. ive made a draft story which is pretty straight forward: the after life was once a paradise, flourishing with fruit and islands containing the conciousness of every dead thing in the form of fireflies. you could leave the afterlife to observe how the world has changed over time. that was until the core exploded. the after life fell into a wasteland of fog and darkness. everyone changed, most into mindless hideous beast that kill for fun, others becoming a shadow of what they once where when they where alive, few not changing whatsoever. you play as a man who was a shadow of what he once was, on a quest to gather the remaining ones that havent changed, combine there powers and reverse all the damage that has been done. on this quest there are many dangers such as “the mindless”(you know them already) and the reachers, people that are just shadows of what they once where either trying to escape back to the real world getting there look back while being immortal still, or people trying to become the “god” of both worlds. you wont find many shadows that are friendly or trying to take the fire flies away to achive there goals. so be alert at all times for there presence, they may or may not wall jump and dash to get to you. ill post some progress and teasers for it as theres some not yet revealed juicy lore lore can allude too. until then (god this is a text wall)

This is a solid plot. Can’t wait for it to be released!

Just out of curiosity, how fleshed out is your plot?

short answer:not much. long answer:I thought about it today and decided to edited it to seem more realistic

wow, you’ve been having alot of ideas

welp ive been thinking of it long enough to decide im gonna stick with this, if I quit I wont just trash the idea, instead ill refine it to try and make it funner for myself to play

I designed the character, Ezekiel 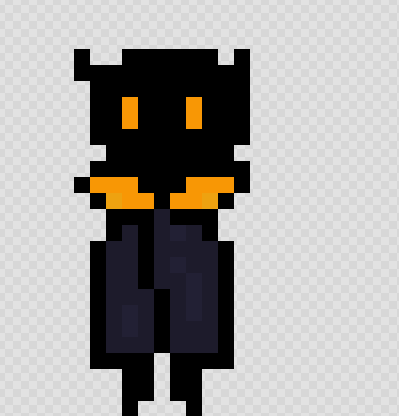 I REALLY like this idea, it sounds great! This is a very well structured plot, to be completely honest, and lots of lore and stories can thrive through it. Well done!

Anyways, after reading this, I’d be really to write for this game, it’s a very compelling plot. You’d be editor of course and giving a firm criteria for the story, but I’d be happy to put in dialogue and building personalities and relationships for characters. Let me know what you think:)