Yeah I see. gloob glab (main villain of taile gamougg 2) would fit well though, he is quite scary and could make for a good cameo appearance in the incident game or something

Would anyone like to give a summary over gloob glab? I’ve heard of him, but I don’t think I’ve played the game in which he makes his appearance.

Gloob Glab is a mysterious sentient glob that wants to destroy things and people to learn about them. Like a mad scientist or something, just way more unprofessional. The original Gloob Glab that Gamougg fought in taile gamougg 2 was defeated at the end of the game, and he died canonically in the game’s “free DLC” extra story. In the DLC, he is seen connected to a strange aqua-colored apparatus and screaming while being experimented on by invisible scientists. His species is unknown as in there is no documentation on it (similar to Yoda’s species in Star Wars). Other “globs” like him do seem to exist, but no one has ever met them.

For this potential Scepter Foundation cameo/crossover, I would suggest a new but similar character of the same species and type to take his place seeing as the original character can’t be featured (similar to Nicole from Dead or Alive 4, a crossover Halo character that was created to replace Master Chief due to storyline restrictions). This new character could be an optional boss encounter or something; the possibilities are endless.

I don’t think I’ve played the game in which he makes his appearance.

Anniversary version (includes no bonus content, but is a higher quality game and includes other new features)

Well, I already have the Starving mass which is a gelatinous entity already.

But I’ll think about it.

Okay, sounds good. The Starving Mass is red though, right? The guy from Flee? Gloob Glab is green and all globs in his species are different shades of green and other close to green colors such as aqua or cyan. Although these two gelatinous creatures do different things and are literally contrasting colors, so I hope that will help with your thinking process.

yeh but I need to play it NOW

Please stop. The game isn’t even released yet and there’s a lot of stuff I would like to keep a secret for the games release.

I don’t know how many times I have to say this.

I’m currently during hardships right to to afford indie, as cheap as it is, I need every dime I can save. So I can’t lock the game from the public that way, so I ask kindly if you just don’t play the game at all until the release.

If you absolutely have to play it for whatever reason, then please don’t share it with the public. I would rather you don’t play it anyway, but can you at least keep it secret from everyone else.

And this is why I always name my game new game so no one finds it.

I don’t know how many times I have to say this.

Oh…
well if it realy is that important for you, i will gladly
stop leaking data!
(though i will keep playing, it is a GREAT MASTERPEICE
of a game) 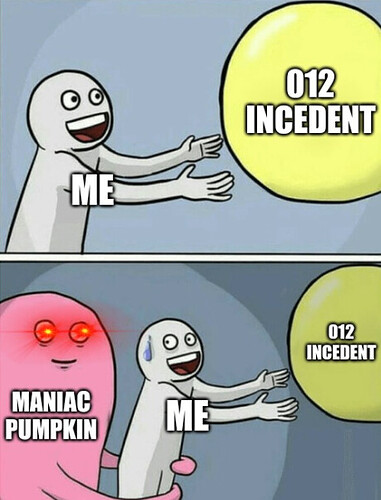 I may have to. The only bad thing is I have the link put up above and now I can’t edit the post to remove it. Unless I get indie and just copy the game, then delete the original, it’s gonna be there forever.

The Foundation mostly observes strange and abnormal phenomenon that have occurred on Earth. Although this security prevents disaster amongst Earth, there is much, much more outside their own galaxy they have yet to even begin.

There are a group of entities called the Foremakers. They are powerful and immeasurable entities that physically can’t perish except by time itself. They each control a section of the dimensional planes and worlds. It is believed that they created the very abilities and creatures that infect the vast realities. They are currently at war.

The Eldern is considered the single most powerful entity. No origin, ancient before time. The father of the foremakers. It seems to lay idle as the foremakers mold the existing planes.

The Foundation believes that two existing entities within our knowledge might be foremakers. The exact number of these entities are unknown.

No further information will be given. The Scepter Foundation series will mostly be based around human perspectives of these conflicts, while there is a much more greater story behind everything.

I just finished up a huge chunk of the origin of just about everything in the Scepter Foundation series. From now on, I’ll mostly focus on earthly events and just basic views.

Also I forgot to explain the fight between Magnus and Titanius.
Titanius failed his mission and Magnus was sent to finish it. Although when Magnus arrived and laid dormant after entry, Titanius used the Dwarf Star to fracture Magnus down the middle. Which prevented the extinction of the human race, but who created the Star titans and why want the human race extinct?
Why does New Caben want to protect the human race?
Subject: 000 is just an entire question on his own, but I finally found a good concept of what Subject: 000 actually is and how he relates to everything. The story eventually wraps around Subject: 000.

welp looks like we got some new lore, lore huntin time!

None of this is in the game.

This is gonna be apart of the written series.

The Scepter Foundation series is gonna be quite a bit hard to explain the situation outside our own reality. Entities come to Earth, SCP fallout and invasion type scenario. The only downside is that humanity in the story lacks the technology and insight to see what’s actually going on behind the scenes. Who’s sending the entities or why are they coming here? What is the rift? What is New Caben? Etc, etc.

I would love to explain the entire story so far how Earth is the least of the problems, but it would spoil and defeat the purpose of lore hunting. Sadly I don’t think this kind of stuff could be implemented into a simple Facility based horror game, so that’s why I plan to move most of the story into written and novel form. Since there’s a ton of stories on earth itself of the entities, Wystan Trials, Termination Division, and the list goes on. But although a majority of the story lies on Earth and the Scepter Foundation, there is a lot to uncover outside that can’t be just thrown all into a story. It has to be slowly given and hopefully it can be deciphered by the dates. Since I plan to date every incident and event that happens on Earth.

But let’s say the situation may or may not have had events or have started millions of years prior to Earths current state.

The basic plot line of weird and anomalous creatures entering our world, threatening our existence is merely a pawn in the overall story. It is gonna be a major part, but the significance is far less than what it’s compared to.

The Series is gonna take quite a bit to figure out and the situations will slowly unfold as each event occurs. I don’t want to have Fnaf style lore where there could be multiple possibilities, but the complex story outside of Earth will be a bit to figure out. Although there is an even greater story outside of that, but that won’t be given at all. The great void. No one will ever know.

The story currently sounds super cheesy when I read it aloud, but on paper, I feel, that after a lot more details and configuration, I could definitely come up with something.

Hello @ManiacPumpkin . Good to see this topic is still running! Right now I am doing a Blandus Theory, and will do a Scepter Foundation (Almost said SCP) theory soon. So what do you suggest?