This issue has been plaguing me since the Summer Flowjam 2021... May someone please help?

Flowlab Game Creator - Taile Gamougg: Mouse Slayer
For the life of me I can’t get the portals to work. I tried similar mechanics in Taile Gamougg 4 and it worked. I really cannot figure out what’s wrong with this thing.

Hey, can you add a few more hints, like:

So the portals activate by touching these blocks (don’t look like switches but they are) in levels 1,2, and 3 (basically all of them).

image1140×555 24.6 KB
This is at the end of level 1. That gray block with the red-orange square in the middle is the switch, and it activates those gray rectangles near the base of the structure (both are circled in yellow).
This is the switches’ code: 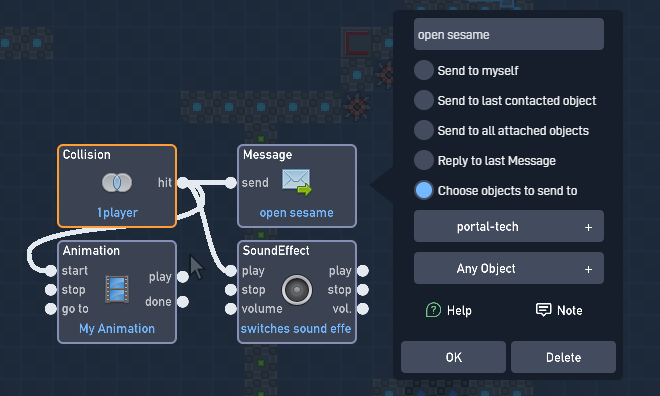 The player is supposed to touch that and then jump down and walk to the portal.
This is the portal’s code:

image856×316 34.9 KB
Its supposed to receive a message, and when it receives that message (which it does successfully), it plays a looping animation. when that animation plays or starts playing, its supposed to input to a logic gate that when both the animation is playing and the player is touching the portal object, it takes you to the next level.

They are currently not doing this, and that’s wrong. You can test them by rushing towards the end of the level and activating the switch.

hey grazer I don’t wanna create a new bug report but in my Tetris in the object “score saver” the text block at “x”:-90,“y”:192 adds a /n (return) but when it join it doesn’t display correctly like ever

Oh ok. Is there a way this can be fixed?

Of course. One thing you could do is just turn on a switch from that mailbox so that the next time the player touches it, it goes to the next level.

Sorry to bother you, but how do I place the switch? It’s not working for me. 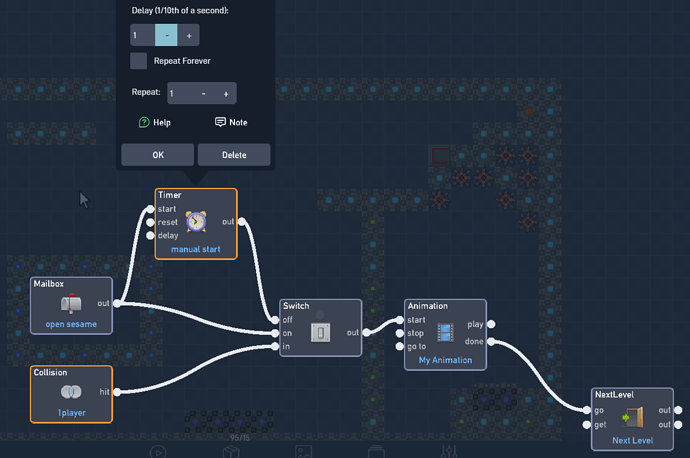 It’s not working, thanks for trying though

Thanks, but it has to loop though.

how long do you want the time?

No I made a new one-frame animation

once extract position and use globals.

I don’t get it

Make each teleporter have two globals, they once → extract pos → global set
The player then extracts these globals based on which teleporter it collides with.