I recently started an itch.io account (follow me: https://todorrobot.itch.io/) and discovered tons of game jams going on over there! I got so excited that I signed up for three jams at once and decided to make one game that would fit the requirements for all three.

Here are the stipulations: 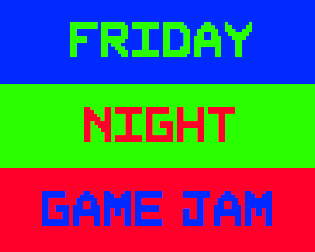 A game jam from 2020-11-13 to 2020-11-22 hosted by Mix and Jam. Mix and Game Jam is a game development marathon with the objective of creating a game in 48 hours! Since the Youtube Channel is all about mechanic

A game jam from 2020-11-13 to 2020-11-20 hosted by ZahranW & KingW. WELCOME! Mini jam is a 72-hour-long, game development jam for independent game developers that occurs every two weeks. Mini Jam involves a required co

The other jams had longer time limits, but the “Friday” game jam had the shortest time and all three ended today, so I woke up early this morning and knocked out a game in three hours. It ain’t much, but I got it in under the deadline and it mostly works 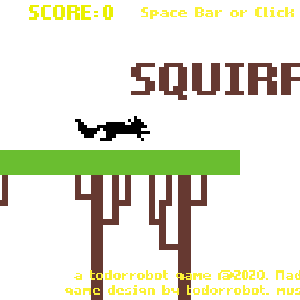 No. I used one you already made silly!

I think its funny how when you click it makes you jump, so if you click the fuol screen, or music off button, you jump!

lol, I thought you neede me to make one XD

I’m following you on itch.io now

Thanks @todorrobot i have one thing to say on you squirrel game could you. The background had parallax so the tress look a bit weird. I dont know if you meant to add that or not. Just thought i tell you

Yeah, the trees are definitely weird. But with a 3 hour time limit, there’s no time to go back and clean stuff up – especially after I spent way too long animating the squirrel haha!

I might go back and finish it up at some point, but then again, I might not.

Yeah no problem it’s a very nice game for just 3 hours. The animation is amazing and i love the retro feel to it by just having 1 color on each sprite. I tried to play your other game the stink bugs from hell game but since I’m on an iPad i guess the game is to big for it so it did not load, very sad

but keep up the amazing work @todorrobot

Thanks! Stinkbugs doesn’t work on mobile at the moment unfortunately, but take a look next time you’re at a computer.

Hey how did you upload a flowlab game to itch?

There’s a tricky little song and dance you have to do with a .txt file and your embed code. Then switch it to an .html file and zip it up and upload it to itch. @JR01 helped me out witha set of instructions and a file I could copy paste into. Perhaps he can provide the same for you.